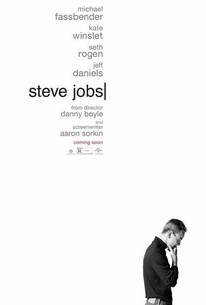 Hmmm... I have to see this for completeness (I've seen all the others). The problem is that movies are a lousy format for relaying the complexity that is a human beings: so they often focus on very small aspects of a story, and tell that subplot with an over-driven color palette. It's like trying to teach ballroom dancing at a rave.

Compounded by Aaron Sorkin: a guy that creates sometimes entertaining exchanges and overly witty dialog, while living in his own reality that rarely overlaps the world I live in. Where everyone is a caricature that talks amazingly fast, and just fit perfectly with the unimaginative stereotypes they've been programmed to play.

From what I've seen in teasers, this story tells aspects of Steve's douchiness, in caricature form, without the context of the other side. Chrisann Brennan and Steve Wozniak, sort of get to get the final word in, for all the things Jobs did wrong to them, decades ago? I think their intent is to try to counter-balance the hero worship and deification of The Steve, and try to slap some sense into the cult followers out there. (If you'd been hurt or burned, you'd want to warn others, "there are aspects of him, you shouldn't want to mimic"). But it's really hard to walk that tightrope without coming across as bitter. And I'm not sure they succeed. Not because what they're claiming isn't true (and isn't an aspect of Steve). But I'm not sure this is the right medium to do it in. So everyone's polarized. His later friends and company that want to keep the legend alive -- the people he burned that want to bring his image back down to earth and the reality they knew. And you end up polar opposites telling stories about two different people, neither of which completely represent the original.

So by itself, it seems to be a fictionalized script written by mean girl Aaron Sorkin, and someone's bitter attempt to get even. (Like Steve never sent Aaron a signed iPad or something). Thus, it does all the things the teaser claims Steve does: invents a character that never really existed, and wears it like a cheap suit. Thus it's no more, or less, accurate a representation as all the other movies, or the one dimensional mannequin they wrote their movie around.

It leaves me convinced that if you want to tell the story of a Human being of any complexity, then it can't be a feature film. A documentary, maybe. Most directors, writers, producers have the nuance of a pile driver, thus what you get out the other side tells you the cows life, by showing you how a hamburger is made.

It was better and worse than I expected. Both more entertaining, better paced, better acted and better dialog. And less associated to any history or personalties that I knew. Completely surreal. This was weird, it so fit a greater truth (on some level), and was so completely odd/off on all the specifics at the same time.

I'd probably read 30 books on Steve and early Apple, I was at many events they showed (though not backstage), and knew a lot of personalities involved. (I have some bonifides when it comes to Apple History). So I have a pretty good model of how I think Steve was, Apple timing, and how he evolved.

Sorkin re-wrote history. Basically all events in Steve's life happened in the 10 minutes before he went on stage for rolling out the Mac, Next, and iMac. And then everyone talked to him in this totally Sorkin style, with incredible wit and penetrating insight (great quotes, fast paced, etc). Only none of those conversations were the slightest bit real (from what I could tell).

But despite all that, you really did get a slightly exaggerated view of some of Steve's douchier moments, and an aspect of bad Steve. And most of what the people were saying to him weren't things they actually said (and certainly not in the context presented) -- yet it was often things they would have LIKED to have said, or thought. (Or implied in other contexts). Like Woz had an exchange in the film, where Steve was saying he had to be that way to create what he did, and Woz points out it's not a binary choice, you don't have to be a dick to do great things. I'd written the same thing 20 years ago (and everyone that I knew that had dealt with bad Steve had muttered the same thing).

So like a lot of Sorkin's stuff, the dialog and pacing was great. The acting was well done. The show entertaining. For fictional story about alternate Universe Apple, it'd be a great dream sequence. But I can't recommend it to anyone. Fictionalized history crosses the line for me. It's like watching an Oliver Stone or Michael Moore films. Goebbels had more finesse and respect for the truth than this guy.

Just a few things wrong were:

Sorkin seemed to want to take every extreme story he'd heard, exaggerate it more, and make it fit his convenient timeline (that changed the whole tone and intent). You both want to hate Steve more than any individual deserved, and simultaneously made him the smartest person in the world (and credit him with way, way more vision than he had). Which is was absurdly ignorant of how much happenstance there is in tech, and how easily you stumble into success or someone else can (and it leads to your failure).

My assumption going in was that you can't tell the story of a Human in a feature film (at least with any depth). But this was far worse than that, it paid tribute to a delusion that only exists in Aaron Sorkin's mind. But he can tell a story well, the timing and flashbacks, and storytelling itself, was by far the best of any of these Steve Jobs movies.