Look, I enjoy Rock and Roll and musics of many genre's. I enjoy mentally singing along (people around me, prefer if I keep it in my inner voice), and who doesn't like to have rhythmic seizures to the beat... what some might call dancing? So I'm not the fun police, and I'm certainly not saying we should do anything to stop the music... but I'm getting too old for this shit.

I went to a Styx concert the other night, and through the oregano smelling haze in the bathroom, some guy from the urinal next to me was loudly pondering the depth of the lyrics and the impact they had on his life (while the other party goers were snickering at his drug-addled rants while doing their business). I was just trying eliminate fluids and giving my ears a few minutes rest from the ringing, not trying to have existential thoughts on 80's music. And how sad it was that some 50 something stoner got his deepest insights from songs with maybe 50 unique words in them.

It got me thinking about music and the true influences on our cultures: and no, I don't think it was just because I was hotboxing THC like I was in Justin Bieber's rented Gulfstream. More likely it was because while I was enjoying the music, I was also a little bored and sad, and looking backwards at my life and what memories different music had on me during different phases of life.

Lyrics are poetry for the semi-literate 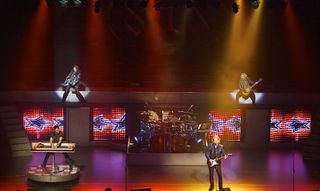 I often mock Hollywood for trying to boil down complex books, into about 12 minutes of any meaningful dialog (or 20 pages worth of script), if it's a good movie. Music lyrics only wish they had 12 minutes of dialog -- they have 3:30 seconds, with 1/2 of that being repeats. There really is no room for meaningful information to be imparted: just raw feelings and a few key words, and let those rattle around inside the listeners mind, and become whatever meaning that the listener wants. How much depth in, "Lady, turns me on when I'm lonely", or "Crystal ball. There's so many things I need to know". I'm not just making fun of Styx. And don't even get me started on most of the crap out there today with depth like, "Nigga nigga nigga", "Me so Horny", or the ever insightful, "Fuck the police". Again, I get the vapid anger or emotion that's being conveyed, just don't pretend that there's a depth of understanding on complex social issues. There really isn't.

Some of the deepest lyrics I can think of:

But it really wasn't deep. It was a line, or two. Soundbites. Little more than bumper stickers. And those that thought that was deep are overvaluing what it was.

So I'm glad for their success. And we need people following their bliss of playing a guitar and singing vapid lyrics and repeating the same damn songs for 40 years, because it makes us feel good by bringing back snapshotted memories and emotions.

So I had fun and enjoyed the rockin. And to be fair, Styx never pretended to be the most existential of the bands out there. And it is art, and provides a value -- we need the escapes. Thus I love it, not because it was ever deep or anything more meaningful than what a shallow stoner kid wanted it to mean. But because it brings back a memory of when I first heard it, or some of the dumb things I did while listening to it. So I'm fine that others get some great insights every time they reflect on Zappa's Bobby Brown or Clown Posse's Miracles. But to me, they're just seeing reflections of themselves in the mirror. And if they think there's wisdom there, they're just failing to recognize that reflection as themselves.

Which means, I realize the circle of life is complete... I've grown from raging know-it-all youth (rebelling against the man, and loving the kindred spirits emoted in the songs of all those musicians), to just another old fart, thinking, "turn that confounded music down" and "get off my lawn, you damn kids".