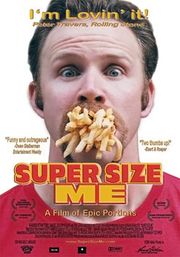 Morgan Spurlock created a documentary that played on all the gullibilities of the left. People aren't responsible for their own actions, evil corporations that offer larger sodas and fries with their meals are why people get fat. (Not the lack of exercise or their own actions). In this case targeting an all MacDonalds diet. It was the perfect blend of anti-corporatism and dodging of personal responsibility -- and was an immediate hit. Only it was all a fraud, debunked by many others that ate exclusively and McD's and got healthier. And it turns out he left out a key omission all along: he was a chronic alcoholic (and sex offender) that likely went off the sauce, and his shakes, liver problems, and other symptoms were most likely due to alcohol withdrawal. But other than it being a complete fraud, by a drunk sex-offender, it was great.

In other words, abnormal diet, stop exercising as much, up his calorie intake not based on needs but based on offer, and blame the fast food restaurant for his bad choices. This is the moral equivalent of saying you'll eat everything you see advertised on TV in a day, and blame the TV channel for him getting sick.

Ignoring that Morgan was a repeat sex offender (so a typical representation of the far left in Hollywood), one of the key takeaways (that came out a decade later) was Morgan had, in his words, "Not sober for a week since age 13".

Soso Whaley copied the all McD's diet for a month and, "I lost 10 pounds (going from 175 to 165) and lowered my cholesterol from 237 to 197, a drop of 40 points." Of course she maintained her caloric intake at around 2,000 per day, exercised regularly and did not insist on consuming more food than she otherwise would.

While Tom Naughton asked for the food log from Morgan Spurlock, and when he couldn't get that, he copied the experiment and made a documentary about it. It got better reviews, and he lost 12 pounds. But reviewers snubbed his film, because he wasn't a sexual abuser or alcoholic, and his story was more truthful.