CFACT's Marc Morano did his late retort to An Inconvenient Truth, in a one night replay of what they showed at the Paris Climate Summit, for $15/ticket. It basically goes through and tries to explain all the fallacies in the pro-Climate Change alarmism, from what are the forcing factors, how do they rank, how does CO2 rank in them, the fake Climate Consensus, the global cooling scare, and all the sensational claims made -- and then debunking them. 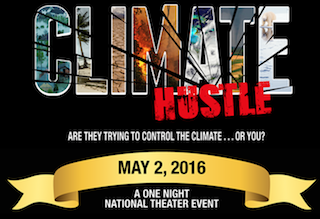 So the data presented was good, but these bad effects and the campiness which it was done with, diminished the seriousness of the points. And the panel outright annoyed me.

Audiences generally liked it (getting 71% on RottenTomatoes), while reviewers did an unofficial boycott of it. Knowing how the other side thinks is key to being able to intelligently discuss or argue a point. That makes this kind of film more valuable than being able to regurgitate the stuff taught in schools or by the media. But many prefer consensus to contrarian views, and thus didn't see this, nor would have interest in it, and will never understand why some are skeptical.

My movie buddy (who leans left), didn't like a few points:

In the end, it was OK. And interesting hour and half rehash for those of us familiar with the arguments. But it was a little too sensational, and spent too much time on distractions and plot devices and graphics than presenting the facts. It tried to entertain, but informing can be entertaining too. So it's worth seeing, to all the people that won't see it, and don't want to hear the other side of the argument. But the presentation is amateurish enough that some who want to close their minds to the other side's points will have plenty of excuses to do so from this film.

A few years back, I did a Toastmaster speech on the subject, with nearly as broad a topic coverage, with more data, and a more neutral tone, in 10 minutes (instead of an hour and a half). And I felt I could have tightened that up and supported some arguments more. So I wasn't thrilled with my result, and the movie fell below that standard for me: