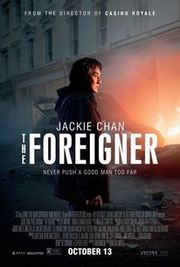 If a Chinese Production company, watched too much Jack Bauer (24) and too many American Revenge films, then made an action movie about that happening with the IRA in the UK, this is exactly what that movie would look like.

The summary isn't completely fair, as the film was adapted from a British action book from 1992 called appropriately enough "|The Chinaman" that follows a very similar plot-line... except the Chinaman was a Vietnamese guy trained by the Vietcong (instead of trained by American Special Forces), but whatever. He still saw his family killed, owns a Chinese Take-out in London, and they fucked with the wrong Chinaman.... you can practically hear the lines from Taken, "I do have are a very particular set of skills". So close enough for the movies.

The summary isn't completely unfair either, as it was done by a Chinese production company, and it just feels wrong: like you're looking at it through a Vaseline covered foreigners lens. Just little things about how everyone reacts feels a little off: like that's how Chinese would image the British Government, IRA members, and Special Forces guys would react.

Reviewers didn't like it, but viewers liked it more, with a 57/80 split on Rotten Tomatoes.

I went because it was a Jackie Chan film, and I've often enjoyed his comedic action films. This wasn't the drunken kung-fu, happy-go-lucky, competent buffoon beating people up with a pool-noodle schtick. This was troubled rogue with not-too-many-lines, because his poor-English-with-an-American accent was easier spent with everyone else talking about him, than him saying too much. Still, Jackie did a good enough job as a serious troubled avenger part.

My wife didn't like the moral contradictions of bombing for peace. While that didn't bug me, and I didn't think it was awful -- it just didn't quite work for me. It wasn't bad bad, and it certainly wasn't the worst film I'll see this year (thanks to Tom Cruise's: The Mummy). But it didn't quite hit either. It felt like if you tried to play a Mexican Telenovela, in an Italian Style Opera, with a little bit of broadway dancing in between. Or you just watched a hard R-rated version of a Bollywood Porn-Dance film. I kinda like the parts... and it almost works, in a weird mashup way... but just breaks too many expectations at once.