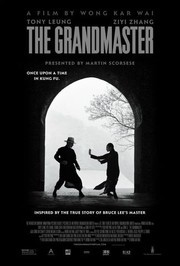 Rode to Santa Row (4 miles each way) on my new electric cheater-bike, and caught this. Love that I got to avoid parking problems and much of the traffic (by going "the back way"). And it was a lot of fun. The movie was good/interesting with caveats.

I've watched a lot of subtitled Asian films, and you have to get the culture a little. The movie is going to be slower paced in a lot of places, precise with the dialog -- and there are always overtones that jab at brash youthful exuberance, value tradition, sacrifice, ceremony. The individual isn't as important as honor and duty. And so if you don't mind that, you'll probably enjoy the film. If you go in as an occidental, wanting western values (and pacing), it might grate or just be slow.

So I liked it. It was one of the best movies of the year, mostly because I hadn't seen this kind of saga in a few years and so it was refreshingly different. At had the interesting film style of modern Chinese Martial Arts films, and it told a good story, with a lot of sub stories and fables.

With Chinese mysticism, you can't take things too literally (and just take the messages). But it was loosely based on Yip Man's life (people do pinyin differently, and it took a while to figure out the alternate spellings of the arts or people involved). And there wasn't quite the normal flow of story, it was a bit disjointed in some ways.

While I liked the story they told, I was surprised they omitted so much: like that Wing Chun was the only/most popular art that traced it's foundation to a Woman. (Which is ironic when you practice the art, because it's a brutal, in close, fairly direct line, striking art. Arts like Aikido, or some weapon arts, would make a lot more sense as female derived arts -- and white crane or dragon styles that trace their origins to the same founder (Ng Mui), can have a bit more the feminine feel to them. Hard to explain, but there's different types of energy and motions. But anyways, there was a lot to the story of the origin of the art, and they just never mentioned it.

Anyways -- if you want to see a mode modern-classical Asian-feeling martial arts saga, that's not just about the fight scene's, this was a good one.