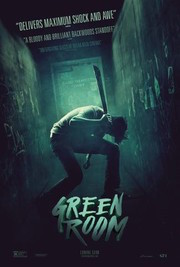 I'm not a huge fan of the horror genre, at least not the slasher type films -- and the ones I've liked most, are the ones that are mocking themselves or the genre (The Cabin in the Woods was the last good slasher movie I saw, that had any originality). So it's rare that I go and watch them in the theatre. But my wife is off flight-attending, and I figured I'd kill a few hours on the weekend, the ratings on this were pretty good (88/84 on Rotten Tomatoes), it had Picard (er, Patrick Stewart), and this was more from the thriller side of the spectrum -- all giving me hope.

So going in with modest expectations, they were easily met or exceeded. For the genre, it was really pretty good. It was a bit slower than the pure gore films, more the feel of the old suspense thrillers. Basically, some kids are in a punk band "The Ain't Rights" traveling through the Pacific Northwest ending their failed tour. I didn't know they still had punk bands, so my nostalgia gene kicked in, especially as they kept referencing music I knew.

It went a little cliché with them going out to some neo-Nazi skin-head bar... and things turn badly. (Who couldn't see that coming?). About every stereotype about white supremacists you could imagine was thrown in at one point or another, except they were in the Oregon Woods instead of deep south. But if you ignore that dose of predictability, everything else was well done. The acting was good, the plot-line was surprisingly interesting and believable -- it's like they had actual writers that were trying to make a suspenseful and plausible story. The filming/directing were right on-target. You know people are going to die horribly, but there's suspense in when/why/how, without the characters being head-smackingly dumb (most of the time).

So it you like horror-suspense genre, it's not going to be the fastest paced, or least predictable of the genre -- and I wouldn't want to mismanage expectations too high. But it's a very solid film in the genre.