The Last Shuttle Launch is a new beginning 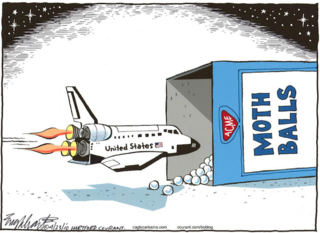 The last Shuttle Launch has happened today. The end of an era. Hopefully the beginning of a new one.

While I loved the concept of the Space Shuttle as a kid, and I worked at Rockwell for 6 years (one of the initial prime-contractors), my Dad worked on the Apollo program, and I watched the challenger blow up live, eventually I grew up to realize the program has been an abject failure: a demonstration of how government bureaucratic monopolies fail hard. Not that it didn't achieve some things, it just achieved very little compared to the alternatives, and it did so at ridiculous cost.

The purpose of the shuttle was to give us frequent access to space and reduce costs of payload by reusing a spacecraft (1). But did it succeed? Not by any metrics I could find.

The Shuttle was initially planned to do about 400 launches, with weekly launches into space (24/year average). We've manage a little over 1/3rd of the 400+ projected launches (135), but only over twice as anticipated lifespan, and instead of weekly, we managed about 1 per quarter (every 3 months), or 1/6th what it was supposed to. Fail.

Early cost estimates of the shuttle were that it would cost about $118/pound of payload to low earth orbit ($607/lbs in today's dollars), cost $36M/launch, and the whole program would run under $90B. But if you divide the $196 billion total program costs (over twice initial estimates), by the 133 successful launches, you get about $1.47 billion per launch (costs as of 3/2011). That's over 400x the initial estimates. Mega-fail.

NASA will spin the numbers a little and only look at the incremental costs per launch and claim it was only $450M/launch (ONLY 12x initial estimates), but they get that by not amortizing in the research and development costs, and many other hidden costs: which all ran way over as well. And if anything I'm being nice with the numbers. If you factor in hidden costs, collections, opportunity costs, the number would be significantly higher.

Some argue that we got advancements because of the shuttle's R&D, but they aren't usually very well informed. Most of the advances in the 70's were minor incremental ones over what we already had, and to get them, they had to stifle all other innovation and R&D investment that was happening. NASA made the political decision to kill all other boosters in order to make the shuttle more viable (it was mandated the only option to space). So it didn't increase innovation, it suffocated it.

For the price of the shuttle we could have developed 5 other rockets (easily), and we would have likely made far more advances with them, and had far more versatility and diversity. And when one type of vehicle blows up, your program isn't set on delay for 3 years like happened with Challenger, you just use one of the other systems in place.

Don't take my word for it, NASA Director Michael D. Griffin argued (3) that if we had just kept going with the Saturn program, for the same price as the shuttle we would have averaged 6 flights were year (50% more than the Space Shuttle, and with 5 times the payload each), and 2 of those flights could have been to the moon and back. That's per year, 30x the payload to space. Imagine the research that was lost.

What's the cost per pound of payload

The most important metric for succes is, "What's the cost per pound of payload to orbit?"
That's really what matters: the math/economics.

Well the actual payload of the Shuttle 55,000 lbs. (15% less than the 65,000 lbs anticipated). Again, if we figure every flight was maxed out in payload, it was about $29,473 per pound of payload.... a little bit higher than the $118/pound originally estimated. (Even adjusting for inflation, it should have only been about $607.70/lbs). And that's before we realize that most of the Shuttle flights didn't go up with payloads at max weight. Let's call it very conservatively $40K/pound.

So $40K/pound for the shuttle compared to other U.S. lift programs like Atlas and Delta (4)? They're about $5K/pound each (with a better safety record). The incredibly wasteful and tremendously bureaucratic ESA (European Space Agency) Ariane 5 costs about $4K/pound. The Soviets Soyuz is about $2.4K/pound. And the Chinese LM-3B runs the economical $1.8K/pound. However, what's the most promising future? The Falcon is developed by a private company (SpaceX), and is expected to achieve under $1K/pound and striving for $500/pound.

When looking at what something gives you it's always a good idea to look at it compared to the alternatives. Imagine if NASA had been using the competition of private industry to drive down costs and up quality (like SpaceX), if they'd had multiple launch vehicles and programs, and been just having multiple private companies competing for those contracts, instead of having their own boondoggle monopoly strangling innovation to space?

So the space shuttle is dead, too bad we wasted 30 years on the Space Shuttle instead of the alternatives. Let's not cry over spilt milk, but instead learn from our mistakes. Let's bring back American ingenuity and efficiency to the American Space Program. Instead of NASA behaving like the USSR, let's convert it back to what it should have been all along: an organization that creates high level requirements and challenges the private sector to fulfill them in the most innovative ways, instead of making more flying albatrosses designed by committee to achieve political instead of actual results.

Space, like our food, clothing, healthcare and shelter is way too important a task to be left to public sector bureaucrats to mismanage. And that's what the Space Shuttle became: a flying lesson on lost opportunities when you let bureaucrats and politicians micromanage innovation.

I suspect in a few years, we're going to find out that killing the Space Shuttle was the best thing that happened to Space Exploration.

I found this article after I wrote mine. I linked it, because it was interesting and seemed to agree with a lot of my points: