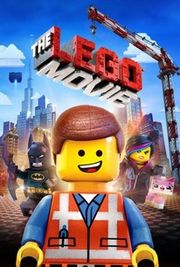 I went and saw this last week (on the recommendations of others). Perhaps my expectations were too high, I was expecting something on the lines of Shrek or Lion King. And while I admit that everything was wonderful, and the batman character had me amused at parts. I fell asleep, woke with a crick in my neck, got heartburn from the hotdog and onions, and walked out before the end. (And I've sat through many a movie that I thought was bad, just to see if it had any redeeming qualities in the ending).

Some said the message was, "don't listen to your parents, others know better". I didn't get that, mostly it was "everything is awesome" which is a funny/catchy song. And batman liked everything black (or dark grey). The other message I did catch was about an engineer that was replaced by some overlord, and was trying to keep all the lego product families, separate from each other. (You didn't mix star-wars parts with the unicorn parts, and so on). After like the 5th lego land, I was bored by overstimulation.

So I wouldn't say it was bad. But it's getting these fantastic reviews and tons of praise, and to me, it was firmly mediocre at best. But based on Rotten Tomatoes (96/87), I'm obviously in the minority.