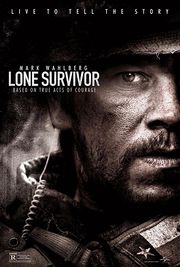 I went and watched Lone Survivor. As was no surprise -- the audience preferred a fairly apolitical war movie more than the reviewers did. Peter Berg may be a victim of Hollywood dogma in some of his more vocal opinions, but his dad is a Naval Historian, which seems to keep him grounded and from running way off the rails on his war movies like most of Hollywood does. And while there is a bit of Hollywood'ing in the film, it stayed fairly true to the book, which is way more honest view of the military than what usually comes out of the land of fake boobs and faker people.

Hollywood is often the land of followers, which is why the same film made over and over again, keeps winning awards for such imagination as being French Bean Vanilla, instead of ordinary Vanilla. Once Coppola won awards of Apocalypse Now in the late 70's, the recipe was set for Hollywood for every movie since then:

And viola: Hollywood liberal dogma, injected on your audience, over and over again. No good could come out of war. The best characters would later come to reject what they did. And anyone that believed in the military or their job would either come to reject it, be an asshole, or get killed for being too gung ho.

Now there were the invincible action flicks as well, that glorified war and hollywood plugged their noses and made money on. But those were just about appeasing the ignorant with over-the-top action, and showed good versus evil in a very cartoonish setting, so would never win awards. I think they were intentionally stupid plots and over-the-top action to mock anyone that would pay to see them.

The REAL Hollywood depth, and award winners would be the same liberal view of the military, over and over again (disturbed people either in war, or because of the military): Apocalypse Now, The Boys in Company C, Rolling Thunder, Full Metal Jacket, Platoon, Hamburger Hill, MASH, POW The Escape, Casualties of War, Rules of Engagement. And about disturbed folks coming home, Taxi Driver, The Deer Hunter, Born on the Fourth of July, Welcome Home, Heroes, Coming Home, The War at Home, Jackknife and so on, and so on. All selling the same message about the military. You can't be in there if you're sane, and once the war is over, you'll adjust poorly to not killing people as a way of resolving problems. Even the best they could create (and claim were balanced) like Saving Private Ryan, Forrest Gump or The Hurt Locker, had the same undertones, they just weren't quite as blunt about it. So you kind of know what to expect.

It was a book written by an actual military person, and Berg and team seemed to stick fairly close to it. The military guys were not disturbed misogynistic jerks. They were professionals, mostly family men, trying to do a nasty but necessary job, of killing really really bad people. And yes, the Military did SNAFU things, but it didn't try to overstate it. They were running many missions in many places, people really cared what happened to other military folks, and were trying to do the best things they could, in some pretty shitty situations.

A friend I saw it with had read the book. And where the movie deviated from the book, you could smell Hollywood:

But it stayed true in most of the important ways. You had pretty good guys, trying to stop generally pretty foul guys. And whether you agree with Afghan war or not, there were some good civilians in pretty sucky situations, and sometimes doing the right thing, in spite of great personal risk. So the fact that it tried to stay truer to the actual events, may not have made it the best action film, or most entertaining war film to come out of Hollywood. But it make it one of the better ones.