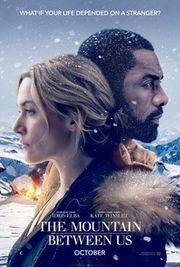 DirecTV gave me a free 4K movies to watch and home (with limited choices), and this was one of them. My wife said her Aunt thought this was one of the best books, "she'd ever read". So we tried it. It was overpriced. A rom-com survival film, with not a shred of comedy or believability, pounding every cliché into the ground with awkward acting and dialog, which left me bored and feeling like I'd survived something harrowing, by making it to the syrupy abrupt ending.

After the cancellation of their flight (due to weather), Neurosurgeon Dr. Ben Bass and photojournalist Alex Martin pay a charter plane to get them out. Knowing a storm is coming the pilot (Walter) doesn't register a flight plan, has a stroke (which causes engines to stop and the tail to break off the plane), and for the rest of them (including Walter's dog) to crash into the High Uintas Wilderness relatively unharmed.

They proceed to survive, get attacked by a cougar acting very un-cougar like... trek out of the mountains while starving (never consider eating the Dog), fall into ice ponds, find shelter in a cave or cabin with nothing living in them... and despite never having a meaningful conversation -- fall in love.

I can't think of a single survival or romantic film cliché that they didn't crash into the mountainside, then beat into the ground... slowly, and awkwardly. It make most Hallmark movies look deep and believable.... oh and on second thought, it wasn't, "The Mountain Between Us" that the aunt had loved... it was "The Ocean Between Us".

The worst part, is when watching it at home, you can't storm out of the theater grumbling at what a shitty waste of celluloid that piece of trash was. I'm not surprised that most on Rotten Tomatoes didn't like it, I'm makes me lose faith in humanity that 41/49 did. The worst movie of 2017, and I had to catch it on December 30th.