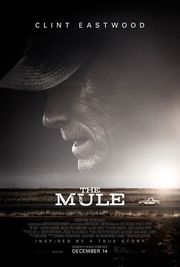 The Mule is a LATE 2018 American crime film (that I saw in early 2019), produced, directed and lead acted by Clint Eastwood. The move is based on The New York Times article "The Sinaloa Cartel's 90-Year-Old Drug Mule": a true story an octaganarian World War II veteran who became a drug courier. Clint does a good job of sort of the early Breaking Bad type amoral anti-hero, someone you kind of want to sympathize with, and sort of like, but is a bit of a self-centered dick, with a lot of regrets in life.

The plot is simple: Earl Stone is a 90-year-old horticulturist and Korean War veteran, who runs a package to allow him to help his family and to pay up for his selfish life of neglect. His age, race, and adherence to driving rules, keeps him out of the laws eye -- and he is soon running huge loads and making big bank. Plus his grumpy charm has the cartel members calling him Tata ("grandfather"). While the DEA informant is helping narrow in on this drug-runner.

Charming, interesting, but not exactly exciting, Eastwood's style is sort of methodical, patient, and let the story unfold at its own pace. (Like the Character). Rotten Tomatoes gave it a 65/67, showing that generation Tide-Pod doesn't have the patience it takes to like a movie that isn't Michael Bay frenetic. And Progressive far-left critics aren’t a fan of Eastwood over his disdain of Obama, or willingness to mock PC culture by showing flawed characters (mild bigots), without them being unredeemable. But if you want a not crazy paced, non-action film, about a horticulturist turned drug mule: because he likes the attention the money can buy him, then this is a worthy film.

I liked Eastwood's Gran Torino - the sort of out-of-touch (a man out of his time): but with a certain genuineness. And in this movies and Gran Torino he sort of explores the late-in-life epiphanies, and willingness to make sacrifices or take risks that only appeals to the young and dumb, and old and wise, for opposite reasons. Not a dramatic or action heavy weight, just a subtle story about late-life risk taking and being willing to go out on your own terms.