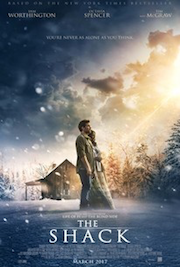 So we went and saw the movie “The Shack”. My wife had me convinced we were seeing a movie about a the life of a Basketball legend, but it turned to be a religious movie. I jest. I knew what it was about: she’d really enjoyed the book and tried to convince me to read it when it came out, but I think I muddled through about half (as parts of the movie were very familiar, but not all). It was more enjoyable to me as a movie (cliff notes) than in book form, and I’m not sure why. I think I’d just read my fill going through the Left Behind series.

Left leaning reviewers hated the movie (20%), and audiences loved it (84%). This is all too common on anything that touches a religious or political bend. It’s like all the reviewers have absolutely no empathy or are completely out of touch with their audiences… or they have a big chip on their shoulder over Sunday school. But what do you expect from people that think Oliver Stone or Michael Moore does documentaries? They have their religion of collectivism or statism, and thou shalt not put any other Gods before their one true God. Plus, most religious films are traveling well worn metaphorical trails: it’s not going to get much on originality but how well the story is told or acted, and what the lessons or stories conveyed is what’s important. So it was nice tug at the heart strings and reminded folks of important lessons, and thus well worth the money (if you like these kinds of films).

But I’m getting ahead of myself. Why would an atheist (or agnostic) get dragged to a religious film? And why wouldn’t I hate it’s treacle-laced dogmatic aftertaste? Because it had a chewy good center. You can put some chocolate chips and honey in bird seed and still end up with a pretty edible granola bar.

A little digression into things beyond complete comprehension

I studied eastern medicine and pressure points enough as a Martial Arts instructor to know there are no physiological systems described in eastern medicine (meridians, pathways, Chi, and reheater organs that do NOT exist physically). But I also studied it enough to know that there's general benefits that extend well beyond the placebo effect, and those effects are real. I can also demonstrate Chi’s physical effects, both on me and others, which is pretty impressive for something that doesn’t exist. So it is both wrong (in explanation) and right (in application) at the same time. If in my arrogance, I denied that the outcome existed, it probably wouldn’t exist any more, and the world would be worse for it.

Turns out, if you do trial and effect long enough, you’ll have something that works. Then, because you have people that like describing things in mystical ways, they invent mystical explanations for why it works. Those metaphors and models help them share information in ways that others can comprehend. (Poets and Bards also told stories into prose and song to help people remember: they weren’t great stories because they rhymed — they were rhymed because people made them rhyme to remember great stories). The point is whether biases crept into the stories on why or how it works, why or how it works was never important to begin with — those were just constructs to help us remember what works. The results are real, even if why/how it happens isn’t.

Western religions it is similar to me. I went to religious schools, and just can’t wrap my head around the biblical stories as literal truths (I’ll never make a good fundamentalist): God is Super-Santa Claus, spying on us all, offering 72 virgins, or a less salacious paradise if we’re good, forgiving us only if we say enough Hail Mary’s, or letting us burn in the fire of damnation for petty wrongs (like how often you rubbed your genitals, and with whom). I never bought that. It reminds me of a truism I created, “Don’t anthropomorphize God, s/he hates that”. But just because ancient man decided to make God in his own image, and tell stories about righteousness and how to be better to each others, in ways that mystical primitives could understand, doesn’t mean the lessons conveyed are all wrong. It’s like Quantum Mechanics — just because someone doesn’t really understand it, doesn’t mean it’s not real, or they can’t get desired results by pretending it exists.

There’s deep wisdom in the Bible and Christianity, just like there can be in other beliefs. I’ve learned different things from all of them that I studied: Judaism, Hindu, Buddhism, Taoism, Shinto and Bushido, Western Philosophers, and Middle Eastern (Islam). So what I can glean from each (or can’t), is more about me and my failings, than about the failings of the source. So get that I can be an atheist (or agnostic) about Religion, while still living my life trying to be the best, most forgiving/loving/tolerant Christian, that I can be. But I also try to live parts of my life by Bushido (living in the now), following the ways of the Tao (balance in all things), and still can get peace and enlightenment through meditation. You can still be rewarded from each belief system, even if you’re arrogant enough to deny some parts, as long as you’re humble enough to accept that you don’t have to understand everything for it to be real and work anyways.

Back to the movie

The Shack is a story about loss and suffering. It is about the arrogance of holding on to anger/resentment, and judging others (or judging God) with your partial understanding of everything around you — it is a reminder about letting go and forgiving. Good people die. Bad people sometimes get away with it. Most people have burdens you can’t understand. Stop judging: resenting others for their flaws and failures is a waste of both your time. Accept who they are (warts and all), and either let them in, or avoid their toxicity — but pick a path and move on. Life is never going to live up to your standards, so in order to have a good life, you just have to accept what is, instead of what you wish it was. Stop trying to change others, just try to help them with whatever stage they’re at. Because life is finite and hard enough, without you trying to control it all, or resent a God for wrongs done to you or others.

It is a lesson in humility, and letting your resentment go. It is about faith, when you feel wronged (for you, or for someone else). It is about the meaning of God to Christians (though not necessarily orthodox/fundamentalists). There’s a lot to like in the movie in teaching people how to achieve peace through forgiveness, and stop holding on to past chips on their shoulders. So there’s a lot to take away from the film, whether you’re religious or not. Whatever you take away from it (or not), is probably more about you, and where you’re at, than the film.