This American Life: The Super 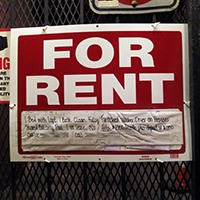 "The Super, was enjoyable fluff.

It continued with the story about how the landlord did everything he could to help this family that just kept failing to pay, and them basically fucking up, repeatedly, and how invested he got in their life (and thus he took their failure/lies personally). And how that hardened him: it's just too emotional to kick people out, so he had to screen harder, and put up walls to make the job more palatable for him. (It just hurt too much to kick people out, so his solution was to shut them out).

But my brain was off on the bigger picture. What went through my mind was, “there's no such thing as a liberal landlord... for long”.

That hardening is true of all service jobs. 98%+ of people in the world are good. But 2% would rape you and leave you bleeding to death in an alley. If you deal with enough people, you’re going to run into that 2%. How you react to that reality, is what will define you.

I was thinking about the quote, "a conservative is a liberal who's been mugged". e.g. you grow out of idealism and naive trust. But that feels like a leftist view of the right, and a bit backwards. While youth and naiveté leans left, it’s certainly not exclusive to it. And there are many lefties that survived being mugged and didn’t switch ideology. So I don’t completely buy into the humorous anecdote. But how we respond to getting mugged, is a reflection on us.

I think the left leaning folks think in terms of the group/herd/community and emotions (feelings of hurt and betrayal). So their natural reaction is what? Build generalized rules and emotional walls to protect themselves (as the person in the story did). Make a law/rule, that will fix it.

Being walled off is one way of doing it. I don't think it's necessarily the best way. My Instructor used to say, "keep the tiger behind the bamboo". If no one knows you (and you're not caught up in their drama), it's far easier to keep the business as business (and not let the emotions cloud your judgement, or get hurt). I get it. And that works for many. But what kind of world does that make?

To me, that’s sort of sad. How can you love your job, and distance yourself from those customers (for your emotional safety)? How can you build relationships with them, which is how a lot of business gets done? How can you not be disappointed at all the people who break the rules anyways, or that rules are often applied overly harshly to the wrong people? It seems to me, to be constructing a heartless bureaucratic dystopia (e.g. California, the IRS, etc) — while being destined to failure and disappointment. A life where you’re constantly trying to stiffen penalties to punish the guilty, and simultaneously, selectively ignoring those rules for those who “just made a mistake”. If I was a tarot reader, the Five of Cups would be coupled to that path.

I think more the other way: the odds, facts, and the individual. The problem isn’t the group. 98% are good. The problem is the individual. Thus a group solution will never work well. You need to filter to the actual problem, and not generalize to those who don’t deserve it. So when dealing with the individual, be open, lead by example, and try to be all the things you want in others (open, honest and helpful). Most individuals are good, a few are complete assholes. Any failure to recognize that is MY problem (not theirs): they are who they are. Trust... but verify.

So life is about the balances. Learning to give everyone the benefit of the doubt and treat them like they’re good individuals, sincerely smiling and wanting to help them and be close. Learn to cope with your disappointments in others actions (that's your problem), and take more the Patrick Swayze/Roadhouse model: "be nice", "be nice", "be nice"... until it's time to "not be nice", and them make them 100% sure that they prefer the nice you in all future engagements. Don’t shut off the 98%, just make examples of the 2%. But as they say, if you eventually do run into the 2%, then “sometimes your purpose in life, is to serve as a warning to others”. Being compassionate to the 2%, may lure more of the 98% into that path. Being a complete hard-ass to the 2% reminds the 98% of what the better path is.

Create the society you want to live in.

But I suppose everyone sees these things differently. I’d just much rather live in a world where we trust most people (and punish the baddies), than building all these walls and obstructions for the 98%, to protect against the 2%.