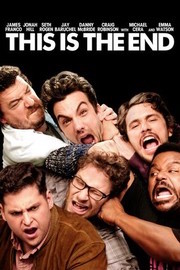 This was "Left Behind", as re-written by some stoner-slackers, and starring Hollywood Narcissists, starring and mocking themselves.

Foul, crass, occasionally some funny one-liners. At least it isn't pretentious and the purpose is to make fun of Hollywood types. While funny, I'm sure I would have enjoyed it more if I was 20 years old and drunk or stoned while watching it. (Which describes the enthusiasm of the college aged audience I saw it with). As a fifty something, I felt it wasn't bad, but there were many movies in the foul-mouthed genre that I preferred (Up in Smoke, Porky's, Dogma, the Hangover).

The girl from Harry Potter kicking the guys butts because they sounded rapey was worse the price of admission for me. But as you can tell, I have a pretty low bar.

Still, if you're looking for this kind of film, it's probably the best one in theaters this month.