Thomas Piketty is a French Economist (and woman-beater), who used Emmanuel Saez's discredited research (study) on how things haven't gotten better for the middle class, as the basis for his new socialist manifesto called Capital in the 21st Century (a play on Marx’s Das Kapital). Economically, the study/book was crap: politically, it was gold. It told the left leaning and their media what they wanted to hear. So it made the NYT best seller list in Fan Fiction, and everyone talked about it. It was peer reviewed and debunked in spades, but not before the gullible gobbled it up as a tasty plate of confirmation bias. Nom nom. 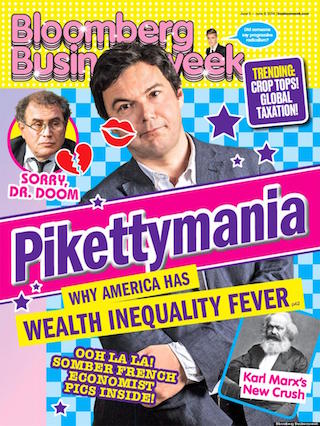 What happened is that there was another French Economist/Activist/Fiction Writer, Emmanuel Saez, who did research showing that incomes hadn’t risen for the poor as much as the rich, by ignoring all the ways that they had risen. He was quickly rebuked by real economists: but he won awards for economics (and creative writing).

Logically, it was full of holes: salaries hadn't gone up for poor, as long as you ignored tax deductions, credits, rebates, unemployment insurance, welfare payments, food stamps, Medicare, Medicaid, subsidies, pensions, Social Security and employer-provided health insurance (and assumed there was no changes in compliance/reporting), or changes in family structure. In other words, it was a joke. But because he told politicians and the media what they wanted to hear ("income inequality is the new global warming"), he was also one of the most cited charlatans since Charles Ponzi. So with those "credentials", Piketty teamed up with him, on some follow-on research.

So Piketty probably figured that since a study could be disproven and still get that kind of fame/attention, imagine if he wrote an entire book?

Not only that, I imagine his reasoning was that if it was long enough (600 pages of table-laden full of flim-flam and distractions), that was regurgitating the same flawed premises and worse conclusions (with more fluff), that no one would be able to focus on a single error, because there was so damn many. Or at least he would cash in, before people noticed it was all hokum, wrapped in mendacity. And viola, Das Capital 2 was pooped out, and parroted by gullible rubes that failed to notice that all his premises were wrong. (Even Emmanuel Saez criticized parts of the book, which was based on co-research).

Economists can't agree on anything, but one thing that 80% of economists do agree on: That Piketty's r>g and is the cause of rising income inequality, is wrong.

He’s blatantly wrong on all of them.

Now #3 is nuanced — just because it worked well in the past, doesn’t mean it will continue to work well in the future. We don’t know (we just strongly suspect). But his whole Malthusian Chicken-Little theory, is incredibly redundant: the world (as we know it) will end, if you don’t give the leftists all your rights and all your money to let them shepherd us through these troubling waters. Historically, we ignored them more often than not, and got through much better when we did. The few that were gullible enough to give up control to so they could "help", ended in wars, purges, famines, re-education camps, mass murders, and other brutal violence and tyranny. But the only thing all these same theorists have in common, in all of recorded history, was they're wrong. I have little reason to think that Piketty is going to be the exception in the group.

So other than the 3 foundational premises are all wrong, and his conclusion having all of recorded history going against him, the Press loved it. The real economists hated it.

What did Saez/Piketty and their followers leave out?

So not only were they massively wrong in how much incomes had grown, and completely missed how much class mobility there is (go through various groups, from rich to poor, during their lives), but they either were completely incompetent as an economist or intentionally didn’t account for all the hidden income gains (or changes) that would eliminate their income inequality delusion. The left loves them for their agenda, the informed resent their political propaganda (disinformation) that is used to mislead the gullible.

There’s another scam on a scam.

Reagan changed the tax code in 1981. Why does that matter?

Did the rich suddenly get any richer? Very little (because a rising tide raises all boats). But what really happened is the accounting changed. Thus anyone that uses personal income taxes as the basis for their “income inequality” numbers (without adjusting for these changes), is either a complete fool (and knows nothing about tax policy), or is a fraud (they know they’re cooking the numbers by not correcting for these changes, but they’re intentionally deceiving people). Saez and Piketty don’t correct for the tax change. Nor do most of the Newspaper articles that regurgitate the crisis in the middle class. I'll leave it to the reader to decide if the sources are ignorant or deceptive.

For 100's of years (since Marx and before) people have predicted that factories and automation would eliminate the need for workers and thus, the only way to guarantee there wasn't extreme stratification and a huge rich/poor divide, was to have the state steal from the top and give it to the bottom. And every time it was tried, the state was able to make fewer people at the top, and more people even further down on the bottom -- creating more poverty and more stratification (slowing growth). It has never worked before, but this rehashed 1800's economist is sure that we should follow the French model, and create utopia like their 11% unemployment (23% for those under 25), slower growth rates, and their young and educating living at home, fleeing, or living off the state.

If you want look at some articles linked below that shoot holes in the swiss cheese arguments made by Piketty, have fun reading: