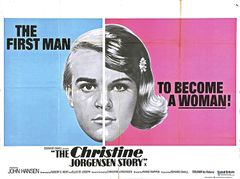 BuzzFeed and other far-left SJW organizations keep looking for new excuses to prove that you need them to turn the world something that it isn't: fair. So they see injustice everywhere and whine about it, polarizing everyone against everyone else, with silliness like this video which has a few trans-actors whining about how they don't get pay equity (or jobs). Of course the reason they don't get jobs, is because they're waiting for people to hand them to them, instead of working for them.

I'm not insensitive to trans issues (many are good people having a tougher life), but if you're like 0.3% of the general population - and probably 3-10 times that of the entertainment industry, then it's naturally going to put downward pressure on salaries. (Too much supply for the demand).

More than that, when Hollywood pushes the outliers as common... in every, f'in film/show, it causes backlash against Hollywood. People go for entertainment, not SJW inclusiveness lectures. So they have to be subtle about it, and it has to add benefit to the story line -- not be another token minority to make the woke feel good, or else nobody on the show makes money, and then there will be no more shows like it. Shows produced for politics might benefit politicians, but not the investors or actors.

Probably 75%+ of the films have no place for a trans person in them, because it's not part of the story, and would just be a distraction to it. Why does Mary Poppins need one of the kids to be transexual? Why does the Terminator need a gender-fluid sidekick robot? And so on. It's stupid. Even Star Wars adding a gender bending Lando Calrissian did little for the plot (though it didn't really bother me either).

Then on top of that, remember that oddity demands more explanation than the cliché: you have to inject backstory and explanation -- all of which distracts from the bigger story arcs, not adds to them. Meaning if you're being true to the book, story or life, you don't need or want to inject Trans or LGBTQ, just to appeal to 0.3% (or 3%) of the audience, and irritate more like 50% that think, "WTF was that about?"

What they seem to want is to be trans, and only playing trans roles. And because those are so scarce, they have no name recognition or career chops — AND they have expectations of equal salaries with those with much more experience? Seems absurd.

Look, good straight actors should be able to convince you that they're trans. And Gay/Trans actors should be able to play straights. It comes with the job. If Hollywood has a starring role, and Hollywood is going to go for the biggest names, then trans folks are screwed again: the bigger name will and should win. (It's better for the film). For Trans to be desirable in a trans-role, they first need to be a successful actor. Which means if they're not doing straight jobs, then they're less likely to get a trans-job, because their Résumé isn't up for the role.

Play straight folks, there are plenty out there. If you can’t do that, then you’re not much of an actor, or you’ve made body modification decisions that limited your career. (Like Tyson getting his face tattooed took him out of the running for roles like, “clean cut businessman). Rock Hudson and many other famous actors were closeted first -- and made their chops being good actors. Some came out later, some didn't. But the point is if you can't make it as a straight actor, then you don't deserve some special privilege (handicapping the casting) just because you're trans: so grow up and get over yourselves. You picked a shitty career to be an oddity. Kareem Abdul-Jabbar, could only play a basketball player or a few other roles, because of his looks/physique -- it's unfair, and it sucks. Welcome to life in the big city.

So you have a demand ceiling, a supply glut, on an industry that already undervalues character actors (and overvalues "stars"), and a market that wants characters that they can associate to. So Trans actors should be more concerned with learning to do the roles that are in demand, than demanding they be in one fo the few roles that fit them (while lacking the experience to carry the role). And demanding equal pay for unequal experience, is just stupid.

This is nothing personal. My wife and I were talking about the same stuff over lunch and her new Union contract (how much better a deal the pilots and maintenance guys got). But while a flight attendant works harder than the Pilots -- there's a much much larger supply of young girls that want the romance of being a flight attendant (and will go through 5 weeks of training), than there are people that will go through a few years of flight training to be stuck in a small cabin being a sky-bus driver with an asocial gaseous windbag next to you. If you don't like it, pick another path in life.

I'm sorry it sucks and is unfair, but the same thing happens for handicapped actors. Or folks like me that might not be one of the "pretty people". It doesn't make them bad people -- but economics aren't going to play well for them in that career path. So follow your bliss, or follow the money... just don’t do the former and bitch that you’re paying the consequences for your own life choices.