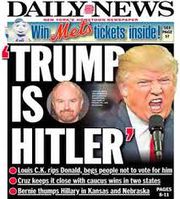 Just like the left had alternate histories about Bush and suffered from BDS (Bush Derangement Syndrome), Reagan with RDS (Reagan Derangement Syndrome), or Nixon, they do the same with Donald Trump with TDS. Instead of learning from their mistakes, they're getting worse. This varies from fear mongering, inciting violence against Trump and his supporters, to outright delusion, but you can't have adult conversations with people that are screaming Hitler, or want to pretend that everyone who disagrees with them is a racist. Of course that's what they want, because if you can discuss the topic rationally, you might find what while he's a bombastic jerk, he's done none of the things they predicted.

Look the guy is a bombastic CEO turned politician, sometimes with the decorum of a bayou dweller at a Manhattan party. So what? That doesn't make him the anti-christ, and absurd conspiracy theories like the Russian Hackers vs. DNC Leaks make demented Montana Shack Dwellers seem rational.

Every scandal that isn't much of a scandal at all, just makes them look more in need of medication.

I'd say it's a temporary affliction, but I've known too many BDS or RDS sufferers where decades of time hasn't cured their malady, and mere mention of the name turns them into ranting crazies.

The irony of ironies is how few can recognize they're sick. A friend of 20 years was posting crazy stuff about how QAnon was all Trump's fault. I asked if that meant Obama was responsible for Occupy, BLM, and Antifa -- and he went full retard, saying that I was just a Trump worshiping, FoxNews watching loon. I tried about 3 times to engage in serious questions, but he kept telling me that I voted for Trump (I didn't), or how my erection would split my jeans each time I heard his name. I have a rule, if someone is telling me what I think, and arguing with me about it, then I can't win the argument with the voices in their head. So I bowed out, blocked him, and sent a nice parting email -- that explained those rules -- but that I wished him the best and if he needed another non-political, he could reach out. (Disagree with me is fine, unless you're arguing with me over what I think, or what my motives are). He ranted back how I could accept that I was a racist Trump lover, and that's why I had to leave, and a few other crass things, until I said "fine" he burned down any other goodwill too. (Then he ranted on his FB page about intolerant and rabid others are).

If that was one case of it, you can write it off to anomalous behavior. I've seen that repeated about a dozen times. So it's not that I think all those oppose Trump are unreasonable sufferers of TDS. But there's certainly more than a handful of the irrational wailers.