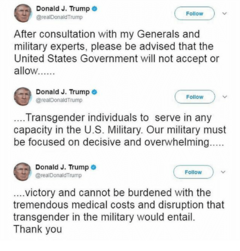 Here's my opinion on Trump's trans-army ban. I'm not a fan of that action, but it is blown way out of proportion, it was mostly the Democrats fault, and of all the things to get irritated with him on, this doesn't make the top 10. And the more hysterical the left gets about this, the more I flip from being opposed to his stupidty, to being more pissed about theirs. Keep balance and perspective. This goes into why.

Trump might be a dick, but he did this to unravel an Obama exec order, done in the last months of his administration (June 30, 2016), and it was enacted for political purposes. So Trump rolled it back to appease some Republican far-righters who were making this an issue on appropriations (and he needed them for healthcare -- something else the Obama admin fucked up, and the right wants fixed/changed).

If the Democrats had been working at all with Trump at all, and he could persuade them, then Trump wouldn't have to appease the far right -- but their #nevertrump stances drove Trump far more to the right than he otherwise would have been. So it's the Democrats inflexibility that pushed him into the arms of another (the far right), just like everyone warned.

So trying to go with the bully tack (that Trump did it because he was mean) won't have much traction with many on the right, because that just doesn't appear to be his motive.

Being insensitive/mercenary? Sure. But there's no evidence he hates gays or trans, there's evidence he'll sell them out to unblock congress and there's nothing he can do to appease the left except die. And LGBTQ community (at least the most vocal side) has been especially obnoxious towards him, so they're reaping the rewards of their most vocal activists -- if they'd had any moderation towards the election of one of the most moderate Republicans on LGBTQ issues, and if their constituency had seemed more divided and much less anti-Trump, then they might have had some leverage against him). But the LGBTQ activists don't get to be caustic asshats for 18 months, then pretend that the backlash has nothing to do with them -- we all know Trump attacks those that attack him, what the fuck did you think was going to happen?

And Obama and Democrats have a history of doing social experimentation and politicizing the military. Republicans have a history of saying, "play your PC-reindeer games elsewhere" and unrolling some of them. This falls into that bucket for me. Don't act shocked that your stupid executive order was going to get rammed back down your throats: if you'd really cared about trans folks, there would have been debate and congressional laws, and crocodile tears may work on your base and political rubes, but not on the informed or those with a clue.

The argument is that this was an important issue when there's only ≈65 transitioning people per year that would be impacted -- and between 2K-10K trans folks in general, but they'll only have issues if they come out as trans and demand other people pay for their transition. But that doesn't hold water or why would Obama wait until June 30, 2016 to address it? And if he really wanted to address it right, the right way to do it would have been through legislation NOT exec order.

So it was political theater on the left that created this problem This invented right was barely a year old. Trump doesn't score points (to me) for picking this battle, and it's not "nice", and I don't support it. But he's doing EXACTLY what Obama did -- appeasing one stupid political constituency by irritating another that hates him for political gains. If Obama had done this right, I'd be more outraged. But he didn't, so this is tit for tat. And those pretending outrage over this, only show they're not clued in, or too partisan to understand what really happened. 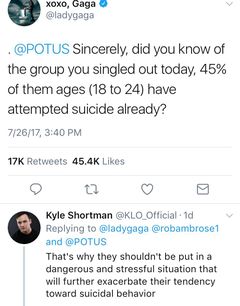 While I have Trans friends and neighbors and I would rather leave them alone than legislate against them, we go back to "don't ask, don't tell" which was nothing worse than Bill Clinton or what Barack Obama ran on. But they're trying to make this a civil rights issue. This is not a civil rights issue -- unless it's one for those with hemorrhoids or flat feet or other medical conditions (who can also be excluded from military service).

This impacts far fewer people than those other maladies that are justification for exclusion from Military service. So the whole, "people will die because others weren't allowed to serve" angle, doesn't hold water for me, any more than someone holding a plackard whining about unfair treatment of those with hemorrhoids should. In fact, trying to use dead people as political pawns, will have the opposite impact for me, and put me against their exploitation of victims. Almost as much as them not knowing the basics of what a civil rights issues versus medical discretion is.

There's big issues (like 330M people seeing 108% increase in healthcare costs) and there's little issues (like a few hundred people that aren't treated "fairly" because of their DSM IV recognized disorder, and because of their 25x higher rates of depression and suicide than the general public, not to mention the medical costs, potential unit cohesiveness and so on). This Lady Gaga backfire meme sort of sums up the cause to me: "45% have attempted suicide", well then why the fuck should we put them under the stresses of being in the military?

Now since I believe you shouldn't judge individuals based on identity politics and group dynamics, and it has to be case-by-case basis, it's why I'm for ignoring the problem. But the party of identity politics (the dems and far left) that are trying to use group/identity politics -- for them the irony is their arguments are the best case FOR the Trump ban. If they're that depressed and suicidal, then don't give them guns and put them under stresses. Not to mention what Muslim nations would do to them if they were captured.

The most valid complaint I have seen is those saying that Trump should have done what Obama did. Have the military drum up a fake study about the negative impacts of Trans people on the military (in some way), then use that as an excuse/cover for changing the policy back.

That's NOT intended as a barb at anyone that disagrees with me --- just the Press and the activists that will continue to have apoplexy over every thing he did, and miss the context around it. And I get irritated by their lies (lack of nuance and balance), and unwillingness to consider any of the realities around the decisions. Trump has a history of attacking people or groups that attack him. He couldn't work with the Democrats, and the LGBTQ's have been shrill little drama queens since he got elected: raise you're hands if you're shocked he might hit them back and sell them out for political gains that he forced them to make to get a deal? If you can't see that, then your eye's aren't open.