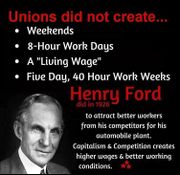 Unions and Organized Labor, what are they, to me? I've been a manager, and in a Union. My wife has been in a couple of Unions and currently belongs to one. I'm definitely not one of those people that think Unions are either good nor bad; because they are both. So I'm both pro-union and anti-union.

I understand history, and understand the need for organized labor. And there is no doubt that when most Unions were formed there was way too little power on the side of the workers. So that side is definitely good.

I also understand power and politics; and Unions prove that while too much power in the hands of greedy self-serving corrupt management may not be good, too much power in the hands of a greedy self-serving corrupt labor monopoly is no better. As they say, absolute power corrupts absolutely; and this has been reflected in many scandals with Unions or the Management that Unions love to vilify. So like all things in life, Unions and organized labor is about balances.

Unions have done good; they shifted power from all on the company and owners side towards the workers who produce the goods. They reduced the exploitation of the workers, and helped people provide for themselves and their families. Then they kept going, and going, and going. We jumped from one put of scandal and corruption into another that is no better.

When there was competition of one Union against another, or against non-uninionized workers, Unions did not support freedom of choice and allow workers to choose which unions to belong to or allow them not to join. Unions did not allow companies to have fair competition among the labor pool (and have multiple unions under one roof, or mixes of Union and non-Union). Instead Unions, often corruptly and illegally, destroyed all other choices. Instead of people being "allowed" to join Unions or organized labor, Unions became a labor monopoly in many companies or industries. The message is clear, join our protection racket or you will be denied the right to provide a livelihood for your family. Like the mafia protection racket, they offer a service. And like the mafia, you are forced to overlook their means. How is this better morally than the company store or other monopolies? Why should I have to buy into their dogma, and contribute part of my pay, under threat of unemployment or worse, to their pockets, special interests and political graft?

I have no problem with a Union, I have a problem with the way many of them act. I think Unions should be under the same Sherman Anti-Trust act that all businesses are under. Which means that companies should be able to mix workers from different Unions, or non-Unions, and that Unions that collude with each other, price fix, or strike for exclusivity, and so on, should be held accountable and under the same laws that effect all other businesses. That's what Unions are after all, a big business that is in control of labor distribution.

Now what do we have instead? We have part time sky-bus drivers (Airline Pilots) that can earn $300K/year for working 80-100 hours per month (roughly half time jobs). I understand the need for safety, and they deserve fair compensation, but come on, does that sound fair to you? I know how to fly a plane, and I'm not minimizing their jobs. But at making 2-3 times the national average (say $150K/year), I start thinking they are in an exploitive position. At double that again, I think it is a serious example of a problem. We have teachers unions that work against the interests of kids, because it comes in conflict with the interests of either the teachers or more often the union; so they fight against smaller class sizes, better facilities, or more choices of students and parents, because they want those monies for themselves. Is that right? Most commonly we have had unions that have so driven up the costs of labor so high, that companies can afford to move operations overseas and ship things for much less than they can afford to make them here. Then they vilify the businesses for doing so.

Internationalization, and going overseas is not just about greed of one side, it is about the greed of both sides.

Imagine you manage a company that employs 1,000 people directly manufacturing, selling and pre-distributing some product, and 10,000 indirectly through further distributions, sales, and support. If you can get your labor for $10/hour here, or $3/hour in Mexico, or $1/hour overseas, what are you going to do? Generally, there is communications and shipping overhead and delays (and storage costs) and so on, the further you take things from your core market. So there is an overhead with moving things away. There is also personal credibility and ego involved in employing people locally, and you have some "noble oblese" for your workers. So if things are good, quality is good, relations are good, and so on, then why risk it and go overseas, especially when labor alone is only one factor among many?

Now lets put a more realistic spin on things. Drive labor up to $20 or $30/hour in the U.S. using artificial means. Now double that again because of the costs of over-taxation and over-regulations and benefits because of federalization - many of which were driven by the special interests that are unions. Add in insurances and other issues that are driven by Unions or the pro-Union (anti-Business) attitudes that vilifies businesses. So now put actual costs of labor in the $40-50/hour rate for a local worker. Don't forget to take away workers respect for management, and create a more hostile relationship between workers and their management (because that animosity empowers the Unions), and throw in anger and resentment because of those constant harassments and hostilities.

Now again, let's compare that to moving overseas or somewhere where people just want a job to survive and will see you as the savior, instead of as the villain. You can dodge all the left wing anti-business bullshit like over-regulation and over-taxation and over-insurance, and anti-business liabilities (and litigiousness), and just focus on what you do, instead of all the other stuff. Suddenly, which is looking better?

Add in the economics of the decisions; you can lay off 500 low-pay manufacturing jobs locally and stay in business (protecting your salary, and the salaries of 500 other higher paying jobs, as well as the 10,000 jobs indirectly related to your company), or you can choose to try to operate at a disadvantage (created by the Unions themselves or at least the anti-business attitudes) and put 1,100 workers out of business. Which is better? Remember, if you can thrive, you can grow and rehire 500 more workers, and indirectly employ thousands more, it is just that they won't be in manufacturing. Which is better? Who's at fault?

Sure it sucks if you're one of the 500 hundred workers laid-off; but perhaps the blind and ignorant vilification of business is not the solution. And perhaps there is some responsibility in the actions of the Union or workers themselves?

Look, I'm not saying that Businesses are all good, or every decision made by management is good or in their people's best interests. But there is a balance that extremists are not mentioning; and most people are ignoring. I'm just trying to counter-balance some of that. Those pointing the finger are seldom innocent. Those blaming businesses for fleeing overseas are ignoring their culpability and responsibility.

I despise blind one-sided hypocritical finger-pointing; life is seldom black and white; and there are balances, and I've learned to distrust those that are trying to hide all their flaws, while blaming others for everything. Those that are willing to lie (or distort) to a certain level, just infuriates my sense of justice and balance.

So I dislike management corruption, or bosses that can't factor in human costs, or cave to greed in big corporations; Enron, World-Com and so on. But that's nothing compared to the management corruption or bosses that do the same things inside the Unions and so on. The difference is that while we admit to one side's bad, we ignore the others; which may be worse or be costing us more. We have hypocrites in the Democratic Party, who ignore organized labors problems, while trying to vilify business; or that blames every problem on evil corrupt republican politicians who are in "big businesses" pocket, while ignoring that they get more money from a more evil and more corrupt bigger business known as organized labor.

My tolerance for the intolerable is wearing thin. And the shriller the extreme left gets, and the more mainstream they are treated, the more extreme I have to get the other way, just to try to pull things back towards the center (which is where I want to be). If things keep going this way, where more and more fanatics have a louder voice and less balance, then I think the country is going to be a very unhappy and intolerant place to live or work. And that's just sad. Because if people could learn to listen and discuss, I think we have or at least had a pretty good country; before we swung too far to the extreme left that is.