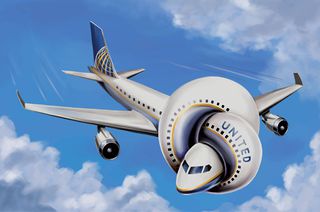 Here's the basics of what happened: Overbooked plane, Poker-playing unethical doctor (who lost his license due to trading drugs for sexual favors) is asked to leave -- he takes the moderate response of calling his lawyer who tells him to make a scene. He ignores directions of the flight crew (a federal crime), tells the airport police to drag him off, then resists, spits and strikes the cops, makes a scene screaming "they're killing me", and gets injured (gets his teeth knocked out on the arm rest) while being forced off the fight. Plays dead, then jumps up, runs back onto the plane, bleeding on the curtains while wailing about wanting to die for the camera -- who his wife happens to have and is filming the whole time.

Since there's now blood, that means bio-hazard and the plane has to be cleared for clean-up. And the media and the uninformed blame the airline. This results in a rash of copy cat idiots trying to cash in on professional victim as a new career path, delaying flights, and annoying people everywhere.

While there's enough blame to go around. The point is if you reward bad behavior you'll get more of it. And the media and their rubes, think that because the Airlines are annoying bumping people (buying them off) that they're always wrong -- and thus encouraging this behavior is a good thing. They're wrong.

I'm not a fan of airlines overbooking -- but they do so because people are flakey and unreliable. 90% of the time, there's folks that won't show up for their flights -- so they over-book to keep the plane as close to capacity as they can. But 10% of the time, everyone shows up (and more), and other issues like commuters, weather, crew sickness, etc., means they have to move people around to compensate for surges. If you say that airlines can't do this, it means that they can't get crews where they need them, and MORE delays and cancelled flights. To me, that's worse. The reason crews bump passengers is because if you don't let them get where they need to be, then whole flights are cancelled/delayed -- so we let small crews bomb 3-5 people to save major annoyance to 150-300 somewhere else. Seems like economic common sense. Name the media outlet that pointed this basic truth out? Bueller? Bueller? Anyone? The fact that you can't shows why you can't trust what you see on the media: they are not looking to inform or inject balance, they're there to sensationalize to get the gullible riled up for ratings.

Regardless of whether the Airline was right, once asked to leave and you prove you won't follow directions, you're a threat to the airplane. Not just yourself but other passengers, and you must be removed. (Even if it is for stupid reasons like giving up your seats). What if they have a fire, and this guy won't listen to directions and tries to get his overhead luggage out before exiting the aircraft, resulting in multiple deaths? What if they had indications he'd do crazy things and assault other passengers while in the air? The airline is culpable if they knew he wouldn't follow directions and let him stay on board anyways. So for the safety of others, and liability to the airlines, he had to be removed.

And if you think I'm making things up, look at what happened since -- the airline is getting sued, even though they did what they could, and had the guy arrested when they landed. Flight attendants are not body guards -- they're there to help in case of emergency.

So you either support the narrative that the Airline was all wrong, and got what they deserved, and cheer on the added delays and increased costs we all have to pay for because of these dumb policies and liability costs. Or you take the rational view that while United might have flubbed the handling of some things, it was the crazy doctor that was the problem. Thousands of others leave voluntarily each month, and that allows millions of passengers to fly quicker and for cheaper costs. Fixing that, will result in more costs and delays. And that's what victor will look like to the snowflakes, social justice warriors and other people that don't think too deeply on the issue.

Reasonable articles on what happened

Opinion poll: Which human scream was laced with more insanity?