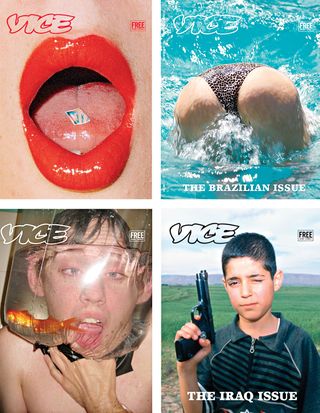 Vice on Guns - A good example of Vice's incompetent bias is this article on How California Gun Laws may have saved lives in the YouTube Shooting. They use the us the Giffords Law Center to Prevent Gun Violence "study" to prove their point. But that propaganda mill doesn't produce studies, it produces bad jokes that anyone with any journalistic credibility would never let grace their pages or airwaves. And their own additions to that crap-sandwhich, only made it worse: Vice on Climate Woketivism - Vice seriously tweeted this, "The climate movement is overwhelmingly white. So I walked away"... the rebuts were priceless. Personally, I respect their bold sincerity in showing their complete woke idiocy. But I laugh at people that take anything they say seriously. NY Mag on Vice - NY Mag sort of sums up the basics as, "Shane Smith’s plan for Vice was that, by the time the suckers caught on, he’d never be stuck owning the company he co-founded." Vice was founded in 1994 when Bullshitter Shane (and his partners) started using money from a government welfare program, to start a magazine in Montreal that was funny, hip, and off-color. Of course the problem with fad-following, is that fads change quickly, and today's hip terms become yesterday's "Bitchen" or "Rad" way too quickly. Shane believed his own bullshit, and became a master of convincing clueless corporate boards that they had their finger on the pulse of youth, and they needed to partner up or get left behind... then he mocked those same rubes for giving him money. He paid (or conned) actors to convince reporters and businessmen alike that a bigger deal was around the corner, so they better get in now. He was a party hound that knew how to show potential investors a good time. And once the company was inflated enough, the founder fled with as much capital as he could, and then was free to blame the eminent demise on his successors. Inciting Violence -

The left Gaslights by trying to cover up their bad actions, by blaming the other side for it. An example of this is claiming the right incites violence, and inferring the left does not. This pops up especially after mass shootings. A few examples to the contrary include: Antifa, Democrats on violence, Fake Hate, How do you start a race war?, ICE, Incel, Kent State, Paying thugs to assault people, Project Veritas exposes Bernie Sanders campaign, Protest funding, Real Hate, Robert Reich on race wars, Statuary Rape, Trump Derangement Syndrome, Twitter blocks Senate Majority Leader, and more. Crowder YouTube Demonetization - After a liberal crybully (Carlos Maza) has a history of inciting violence on twitter (throwing Milkshakes) against conservatives. He used Vox (his parent company) to pressure YouTube to because Steven Crowder calls him a lispy queer polemic douche... because he is one and that was how Maza referred to himself on a few occasions. YouTube admitted that while there was no individual violation of terms they were still going to demonetize Steven Crowder because mocking the left for being horrible journalists and bad people is no longer allowed, especially when it is true. Then YouTube went full retard and started burning down (blocking) historical videos of Hitler (truth) to the point of pulling episodes of Seinfeld that had the Soup Nazi (satire), or anything that might offend the sensibilities of the far left, which is any History they haven't rewritten yet. And far left outlets like Vice and WaPo defend the move and get the basic facts wrong. And Crowder made money on the subscription drive that YouTube's actions contributed towards. (#VoxAdpocalypse) Stolen Golfball Fabrication - There's a story going around about how Donald Trump cheats at golf, with Sports Illustrated's liberal sports writer Rick Reilly telling how Donald Trump beat Ted Virtue as club champion of Trump International Golf Club in West Palm Beach. Rick's telling involved Trump playing ted the remaining 6 holes for the championship title, which Trump won, but only after Ted's 11 year old's ball gets claimed by Trump as Trump's (after Trump's ball goes in the water) and the line, "Daddy that's MY ball", and how the story was backed up by Golf.com. Only Ted's son is 25, is unlikely to have said the money-quote "Daddy...", you don't play a remaining 6 holes from the 9th hole in Golf, the 14th hole (where this is supposed to have happened) has no water feature, and why can't Rick find a single witness to back up the tale "on-the-record". The story sounds like complete bullshit, but that didn't stop FakeNews outlets from repeating the preposterous story (Vox, Vice, Esquire, The Independent, Hill Reporter, Daily Beast, New York Times (contributor Brendan Nyhan), and thousands of re-tweets by the gullible left).