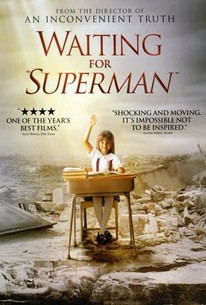 I want documentaries to have pacing, support, and point/counter-point (not a Moore/Gore propaganda film). This was 111 mins to do 11 mins of info, so I think the 89/84 Rotten Tomatoes score was a lot higher than it deserved. If you're looking for a slowly paced, poorly supported documentary that trashes the American School system with all the lack-of-balances of "An Inconvenient Truth" director can muster, then this will be the best option for the year.

The premise is the failure of the American school system, as told from a far left-of-center director, which will go for tugging at the heart-strings (and person interest stories), instead of offering facts and data to support them. So lots of focus on a few personalities or shots of people driving in cars pondering the failure of our system. While I agreed with the message, I wanted it both harder hitting and more balanced. Result: OK. but slow, depressing and not nearly as thorough as I wanted.