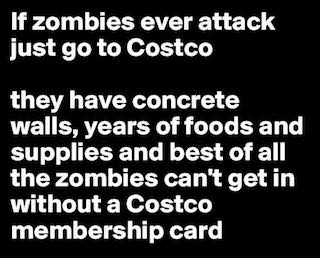 Yeah, I watch the Walking Dead. I can suspend disbelief on the mechanics (like it takes blood/beating heart to feed muscles to make them work). But their lack of anything resembling ingenuity drives me nuts. Haven't they heard of bicycles? There's a lot of them around. You can go faster than the zombies with one, without even trying. Sigh.

They have a bazillion zombies stuck in a pit, with tractor-trailers blocking a high road exit. (Apparently zombies can't figure out how to duck and crawl under the truck?) Fine you dig a trench/slide so they climb up, fall in, slide back to the bottom, and play chutes and ladders forever. Done.

You want to get rid of a bunch, you don't have to lure them away, you just build a funnel into a turnstile with a few swords welded at head height. Since they don't duck, they just shamble through Ronco's Veg-o-matic, dicing themselves into zombie-bites. You end up with a big pile of zombie slaw you have to keep shoveling, but they take care of themselves. (And again, the slide could make for a self cleaning mechanism).

It doesn't have to be sharp, they're kind of decomposing. You take apart a piano, and use the giant harp (wired in a frame) as a screen door, and you'll have sliced zombie if any come to your house. They aren't bright.

A couple wires at knee or neck height around an area, and the walkers turn themselves to crawlers without their lower legs (or a bunch of biting bowling balls). They're kind of like cows and barbed wire, they're not hard to contain.

Then there's infinite zombie power. You put a few on treadmill generators in the basement with a brain in front of them, and they'll walk forever. You could use them like windmill power. An army of mindless automatons really isn't that hard. It's like these guys never played lemmings?