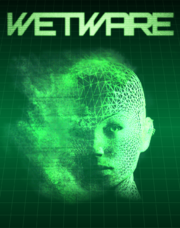 The other day, I got the pleasure of speaking with a bunch of teens at a career center, on a "career day", about what it is that I do, and why I do it (at the time, I was Director of New Media for a media conglomerate.... fancy speak for I helped Newspapers get online and make money doing so). Career day was a lot of fun. One of the things I was asked about is what is holding technology back the most. The answer was easy, "Wetware (People)".

Wetware is slang for the human brain/computation. You have hardware, software, and human cognition (Wetware). Well, wetware is need for the other two, for now... but it is also holding us back. People are the biggest barrier to technology, innovation and adoption. Computers are incredibly simple devices - as one kid asked, "aren't they all just 0's and 1's"? And they are. What makes them more complex is how many 0's and 1's there are, and how we put them together. Computers are doubling in capabilities every few years, the reason progress is much slower than that, is people's ability (or desire) to grow, is not up to that challenge.

Every human being has the full capacity to understand anything that is going on inside a computer, if they put their minds to it. What holds them back is the fear of failure, fear of their own lack of knowledge, fear of looking silly by asking questions, or laziness in not wanting to spend the time to learn.

I love working with the kids, because their minds are open to the possibilities, and they have no fear in learning. They aren't afraid of unasked questions - and they've been told enough that the only silly questions are the ones that go unasked and the results are that the person substitutes ignorance over. Kids understand that, but as adults we seem to forget it.

I believe we should lead by examples for our kids. We shouldn't become stubborn curmudgeons, railing against "new fangled things", but instead to borrow the curiosity of youth and exploration and continue to grow through our lives.

The kids asked how to get started understanding computers. The answer to them was the same as the answer to anyone else. Read a book (or an article in a newspaper), take a class, try new things. Just keep doing it. Even if you just try to learn one new thing about computers each week, after a year, you'll know 50 more things than you knew the year before. If you keep working at it, you'll get there. Don't fixate on what you don't know - focus on the many things you learn along the way.

More than that, "show no fear". If you want to know how something works in a computer, just ask, research and learn. This stuff isn't that hard. It takes time to learn each thing, and can be frustrating at points, but if you keep going you'll get it.

What inspires me is that I meet people all the time who started computers when they were in their 70's or 80's, and now have many new friends and hobbies because of computers. Or many others who started younger, but are shifting their careers or it has made positive improvements in their careers or lives because of computers. But I also still meet to many in their 40's, 50's or 60's that say that their too old to learn, or call on their 12 year old kids to "just fix things" instead of learning about how and why themselves.

No one is too old to learn. Some people just stop trying. Don't be one of them.