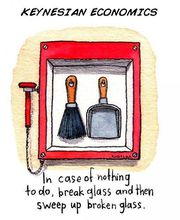 (1) You have to exist in an information vacuum

If people SEE government spending (and borrowing), they're generally smart enough to react to it. Since they realize government spending means the government must either tax, print money or borrow (to fund that spending), thus they KNOW they’re going to get hit by either taxes or inflation: which hurts their purchasing power. So they react (sometimes in advance of the policies even kicking in), by saving more, spending less, or sheltering investements. That negative economic reaction swamps any of the theoretical benefits in Keynes algorithms, sometimes before the policies have a chance to be implemented.

Hayek believed that consumers were smart enough to see government spending and react. Keynes didn't factor that into his models. Guess which maps better in the real world?

Keynes positive multipliers (of spending) turn it into negative multipliers, if people are smart enough to know that government spending means inflation or taxes. Which is why spending didn't work in the information desert of the 1930's, but certainly can never work in today's world.

If you don’t cut when you have the opportunity, all you succeeded in doing is replacing the more efficient private sector with the less efficient public sector, over time.

As Milton Friedman observed, "nothing is as permanent as a temporary tax/program".

Once you create a program it becomes a special interest and thus has impetus that not only keeps it around forever, but tries to make it grow. And in good times, everyone is more tolerant of that wasteful program, so there’s no leverage to implement a cutback. Which means that whole sector suffocates under the weight of a subsidized government competitor. (They reinvest, innovate and grow, less).

Thus if you didn't cut the program, you did soften the dip, a little... but you also soften the recovery by even more. The economy can never climb back to where the economy would have been without that less efficient replacement holding it back. Since any gain in economic efficiency at least partly translates to higher salaries, you lost a lot of earning/economic potential. Since it is just a missed opportunity and hidden cost, leftonomics pretends it doesn't exist. But we know better. We might not be able to quantify (or might disagree over) the exact value of a lost opportunity, but we should all agree that some potential was there.

In the early 1900s, on the job training took hours. Whether working a hoe, hammer, or welder, a worker was a worker was a worker. There was lots of grunt work, and much less skilled labor. Assembling a car, digging a ditch, a monkey could do it. So creating productivity required a body. In the modern economy, it doesn't work that way.

Unions have made job mobility difficult in low-skill jobs, and most jobs aren't low-skilled union ones any more. More of our economy is built around high skill jobs (that have far less worker mobility). Replacing a computer programmer with a ditch digger doesn't work (or vice versa), nor does replacing a SEO Optimization person with an accountant work. So a government temporary bridge projects doesn't help out of work IT folks, or autoworkers, accountants and so on. Retraining programs can't solve recessions since, the training lasts longer than the recession itself. So all it can do is take potential workers out of the economic pool of contributor (even fractional contributor, if they're doing something below their skill level), and moves them to the pool of taker/burden for the duration of the recession (while they're in training). This magnifies the depth and length of the recession. (This was demonstrated with Obamanomics).

If you replace 100 workers with 200, you lose 100 workers worth of money for the same output. That negative multiplier means the economy lost 100 workers worth of potential output. And it's the output (what we produce) that is real net value to the economy. That's where the famous Milton Freedman anecdote (that predates him) about replacing workers shovels with spoons comes from [1], it's not how many workers are working, it's how much they're producing that matters. And in the end, rarely, government programs start out as efficient, and they entropy quicker in a productivity sapping bureaucracy (there's no profit incentive for continual improvement in efficiency).

This is why Keynesian magic positive multipliers never actually worked in the real world.