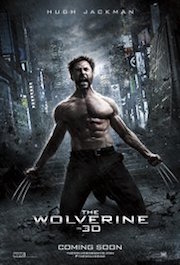 I went and saw Wolverine.

This review tries to give it more existential depth than I think it deserves: e.g. the movie was more cliché than it deserved. Every superhero (superman especially) had the reluctant hero who wants to change who and what he is, but ultimately has to accept his lot in life (even if it is for eternity). Which is almost how long it took to get to the point. Not horrid, but too much teenage angst for an immortal.

It has some nice Japanese imagery (I dig the big guys house, and door especially). But it still didn't work for me. Not that I didn't like it -- I just didn't like it as much as I wanted to. Not sure if it was too over the top, or not over the top enough. But there were plot holes, cliché's, very nice filming in parts (some of the scenes would fit perfectly in a graphic novels) and a reasonable story. So it wasn't horrible, and it was better filmed/directed than most of the super-hero movies of late. But when the best you can say about a film is that it is worth watching for the filming, it means it is not something I'd rave about either.

A friend pointed out a technical flaw worth noting: the shinkansen (bullet train) was going full-speed in the middle of Tokyo, which does not happen.