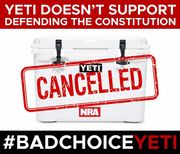 Dick's boycotted their customers (with arbitrary invented gun bans), and their customers retaliated in kind. So YETI decided their customers were too satisfied without having alienating CEO publicly showing that they hate their gun-owning customers. And their customers, already pissed off at Dick's, decided to get really pissed at the over-priced cooler company and blow up a few coolers and swear off the company. Of course YETI is the over priced fad coolers for yuppies & posers, so I imagine their tattooed and gauged ears trendies are likely to just root them on. But they probably burned for more potential customers than they gained by such a stunt.

Of course I don't care that a company chooses to break with another company or that it hurts their image: I'm cool with that. But how and why matter. Doing it with nastygrams, after a public event (like a School shooting) and trying to profit off the death of kids, by leveraging public hate against a civil rights organization (like the NRA), is deserving of some backlash.