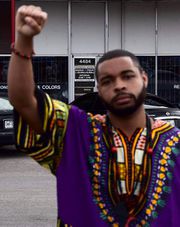 After the BLM movement and media convinced the gullible that black men were being assassinated by the police without cause, increase violence and ratings. Micah Xavier Johnson, Black Lives Matter member and part of other black power organizations (including Black Panthers), goes out and shoots 16 people (killing 5 cops), to get cops/whites back for the fake injustices of Philando Castile and Alton Sterling. The press got the gun wrong (not assault rifle), and downplayed his associations with BLM, pretending their agitation had nothing to do with it.

Of course the press also got the gun type he used wrong, and reported it as an assault rifle. It was a 70 year old SKS, which has no features in common with the dreaded assault rifle. But who expects the Press to get the basic facts right any more, especially when there's an opportunity to divide us on something else: like believing in the Constitutional recognized liberties?[1]

Of course the guy was discharged from the military under less than great circumstances, there were some warnings of his trending fanaticism/racism, but since it was black racism, it would be racist to recognize it as racist. [2]

The Press played up Micah was a "lone shooter".... an outlier. No pattern here. It doesn't count... especially if you ignore that officers were targeted in Tennessee, Kansas, Louisiana, Georgia and Missouri for the same misguided reasons that the Press/President and BLM had inflamed. Can you imagine them ever defending a conservative or the NRA if a lone member had gone out and shot up a black church? Even Micah's sister was rationalizing the radicalization that got her brother killed.