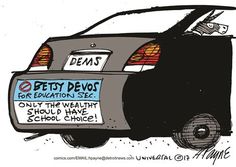 Democrats despise DeVos from the day she was nominated, and not a single Democrat voted for her to be confirmed (voting against confirmation is not supposed to be political, but whether they are morally unfit for office). She was an accomplished Woman that believed parents should have more control over school choice than government bureaucrats: that made her public enemy #1.

There's a fallacy on the left that the right/libertarians want to eliminate public education. This is false, the debate is only over how to pay for it, and where to run it. Should states and communities (and individuals) should be free to decide how they want to pay for and what they want to cover under public education, not the fed. That is all.

Students know they're supposed to hate DeVos, all their teachers told them to think that way, and they're good students (meaning they don't challenge authority and think for themselves). So they can both prattle on about how they hate DeVos, and if you ask them about views that DeVos advocates, they can agree completely with those. Unless of course they asked their teachers what to think before replying.

The DOE was 1975 under Carter. So the complete elimination, would at most revert us to the 1970's, back when test scores and graduation rates were higher (not the 19th century like many imply).

But the roots of federalized politician driven education go back to 1900 to foster a federal progressive political agenda of racism. Before that we had state and local schooling, and still mostly do. Most of what the DOE has done is politicize education, waste money, and create a special interest that's against parents and students. So why keep it?

And remember it's quality -- first they can't do one of the key things they were created for: tracking Student loans. An Obama audit showed (and the story got buried, which is why most don't know about it). Fewer than half of undergraduate borrowers at the average college are paying down their debt. That isn't the really bad part, the bad part is the Obama administration singled out Private Universities with less than 50% repayment rate to force them to add a surgeon general’s warning in all promotional materials about how this might not be a reputable institution since so few find it worthy to pay them back. They also declared that it was unfair to demand the same of public universities which often had higher default rates.

Cronyism is why the left staged such an absurd tantrum over DOE appointment of DeVos (a dept that didn't even exist until 1979).

Remember history and scale. The reason the federal government got into education at all (at the turn of the 19th century) was racism: so that progressives could teach inferior Catholics (mostly Irish and Italians) about the superiority of white American Protestantism (neither were considered that). And the teachers unions are far bigger and have more money than the NRA, which the left complains controls the republicans. Well goose meet a giant prehistoric sized gander.

The reason democrats had such a fight over this is dozens of teachers unions, with billions of dollars that go into campaigns, to guarantee that parents get less choice and power over their kids education. Or as the head of the AFT (American Federation of Teachers President Albert Shanker) said, [1]

Or as William McGurn, Chief Editorial Writer, Wall Street Journal, commented (paraphrased), we scoffed that the NEA was a tool of the DNC. Sealed documents show that it's the DNC that's a tool of the NEA.

But she's more on target than the Obama administration was on issues like Title IX: