What amazes me is that one of the most important things in a beings life, their own ego and sense of self, is one of the most ignored areas of their lives. People often run on autopilot of their emotions. To me, to be consciousness means to be aware of your surroundings. You, your body, and your personality is your closest surrounding. Thus people that aren't aware of their own motivations and actions, are ignoring who and what they are, and are by definition subconscious (below consciousness). This is probably far greater than half the people most of the time, and too many people all of the time.

Freud's concepts of ego was a tool to decompose our motivations to understand personalities.

A person is made up of the balances of those parts of their personality. And through different balances, and which parts were in control, would result in different behaviors and different degrees of wisdom.

What are our actions? Our actions are our egos, in that we are what we do. It doesn't matter if your super-ego tells you not to cheat on your wife, if you give into your id and do so anyways. So I'm looking more at the gestalt (the whole), and not the parts.

Scientists decompose and break things into their parts to understand them. I think that humans are complex and varied, and that while these generalizations are nice tools; they are not as significant as the more holistic actions. The means (our actions) may be far more important than the ends (our successes, or failures).

One of the things I got most out of all my years in the martial arts, was learning about egos. People had to learn to control themselves, and learn self-discipline before they could grow as martial artists, and as people. I didn't only promote (or hold back) based on talent, but also on maturity -- and a significant part of that was on ego.

One little demonstration I did on some tests for rank (belts) was to tell two martial artists to punch each other in the arm. The rules were to start fairly soft, and alternate turns; each person had to punch the other a little harder than the other person. And they could play as long as they wanted or stop at any time after the first round. Some stopped quickly, and some kept going back and forth for a long time. Since it was a test, there was some perceived pressure to "do good"; but they had to decide what that meant.

After the game was done; I'd talk to the class and explain to them that wasn't about who was the toughest or could endure the most pain. The pain was the lesson; and that lesson was about ego.

The rules that I'd expressed clearly were that you only had to do a single iteration; everything after that iteration was their own ego. They were either trying to impress me (their instructor), impress each other (set pecking order) or just to impress themselves (they didn't want to lose), but the pain that they felt in their arms was not because of the other person, or because of me starting the game; but it was because of them. They didn't know when to walk away, or in other words, they let their egos rule their actions. So that pain ( and often bruises), were a lesson to them, about themselves.

To an extent that lesson was a microcosm of the whole purpose of martial arts; if they could get their minds around that, and their actions, then they could learn a lot. They needed to learn that it wasn't about winning over others; it was about winning over themselves. They had nothing to prove, except that they could walk away and were in control of their own egos. They were learning that they could let things go, or they could escalate. And while they might physically dominate someone, short term, if they didn't let things go, they would get bruised in the process. The next thing that would happen is that they would be paired up against someone that they couldn't physically dominate, and whether they liked it or not, they would learn that backing down and controlling themselves was more import and less painful than the alternative. No one wins a fight, and the fight is more with themselves than with the opponents.

As a teen, my friends thought I was an incredible egotist. I was such an optimistic view that I thought I could do anything; and it annoyed them more when I actually could and succeeded way beyond what they thought possible. I sort of got the moniker of Zaphod Beeblebrox; an egomaniacal ex-president of the Universe from the Hitchhikers Guide to the Galaxy. He too thought he could do anything, and was "either really smart or really lucky, and no one was sure which". So I used that as my hacker alias/handle back then. (Computer geeks, cracks, phreaks and hacks had aliases; though those terms meant different things back then).

What my friends selectively ignored in my egotism was that I didn't think I was better than anyone else; I just believed that anyone could do almost anything that they set their minds to (within reason), if they just kept trying. I thought THEY could do way more than THEY thought they could as well. They were just too pessimistic to try. Even when you couldn't achieve a goal, you learned and bettered yourself in the process and by trying. My successes were attempts to better myself and grow, and not about winning or lording over others; or proving them wrong when they "dared me". Though I like that too. But to this day I wouldn't bet against people or bet on what they can't do, because people can do so much more (if they want to) than what others give them credit for.

I enjoyed competition in that competing brought both sides up. I didn't mind who won, if I felt I learned or grew because of it. In fact, I liked playing with people better than myself; because I learned more. A rising tide raises all boats so to speak; so I liked the competition not to win, but to raise the level of us all. The battle wasn't with each others, it was with myself. But when I'd keep playing or competing with people that were completely out of my league they'd shake their heads at the stupidity, without ever understanding the wisdom or reasons. 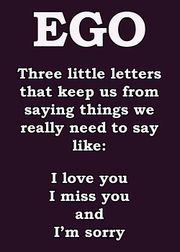 The more I see people that need to be right all the time; the more I know they have weak egos, and often low self-esteem (hidden behind a facade), or worse, they believe their own bullshit and think they are that great (and live in a universe of one). Of course the opposite can be true as well; the people that never stand up for themselves, or think they are always wrong, also have weak egos (sense of self). So there's a balance. But the way to achieve that balance is to not exist in either extreme.

People that can't lose, have to be right, or have to have control are winning all the battles (with others). But they are losing the war; not just with others (since people don't like to be around that kind of person), and not just with themselves (because they aren't learning control), but they are losing the war with life (since they are missing opportunities to grow and learn and experience without fear of losing or not getting their way).

What I think of as most people's ego or pride, is really more about anti-ego (insecurity). We talk about this sense of self and motivations and so on. But the truth is most people aren't doing things because they are conscious and aware of what they are doing; but because they are sub-conscious and just reacting. They aren't trying to raise themselves, and grow, they are out there trying to prevent that by holding others down to feel bigger themselves. They confuse winning and losing the immediate argument or action with what's really important - and that is so sad.

Most of the time, people aren't reacting to what they want to do; they are reacting to the negatives; fear, insecurity, self-doubt, desire for control, refusal to accept what is. They lash out at people they like or love because they don't want to be seen as weak or flawed. Ironically, it isn't the "losing" or letting things go that makes them weak; but the unwillingness to do so, to grow, admit their mistakes and learn from them. Hopefully some will make this new year the year that they become fully conscious. 2002.12.31