Ethics of a fight

Ethics of a fight: know yourself, and know others. Since nobody wins a fight, the best way to avoid loosing one, is by not getting in one. To avoid doing that you should understand your motive and theirs, understand aggression, escalation and take responsibility for your actions and even reactions.

Arguments can escalate, and can escalate into a fight. And a fight can escalate into combat (life & death fight), and combat can end in death or incarceration. Think of that BEFORE you let your temper (ego) get the best of you, or you take it on yourself to chastise that lousy driver, loud mouth at the restaurant, etc. The consequences of your actions may be more severe than you realize.

If you don't understand someone, or where they are coming from, you are more likely to accidentally provoke them. And this can lead to escalation-trap. So it is everyone's responsibility to try to understand others (and themselves) and to try to be tolerant of others and their points of view. This doesn't mean you should never disagree or argue; just that you need to be responsible for the consequences, and apply forethought to situations. 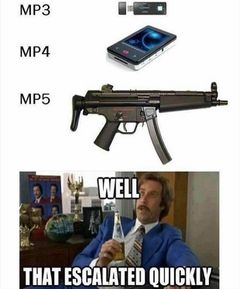 Escalation is caused by both parties not backing down. Often by not backing down, the opposite happens... and things heat up. This is most often about ego; but sometimes about righteous indignation or truly defending that which is wrong.

When you are arguing or fighting you must be aware of your point of view, and your opponents. Disagreeing is fine and sometimes great tool for learning, and I can argue hard with people I know. But at every stage you should be weighing, "is this worth taking to the next level"? (What are the risks versus rewards). Once you've assessed that this isn't a casual argument, but you're dealing with something that can get into a real fight, then you should probably opt for de-escalation (unless there's something violent or wrong happening). An example might be in an argument saying, "I don't agree with your opinion, but I don't want to discuss this further." You don't have to be dishonest, but you don't want to provoke the situation further.

If you are escalating a fight (verbally) then YOU are provoking the other person into fighting - and you do not have the right to claim that it was "unprovoked" since you helped pick the fight (or contributed to it). You can walk away (or try to) at almost any time, you can diffuse the situation at almost any time. The person that throws the first punch is ultimately responsible - but with enough effort, we would sucker someone into doing that, and give ourselves an excuse to vent our frustrations on them. That is why we have a responsibility to NOT escalate things.

Again, that doesn't mean you have to back down on things that are right, or tolerate things that are wrong; you just have to know what things are about, and the consequences of your actions. Others may choose to escalate things, but you need to watch that in the process of not backing down, you're not heating things up.

Sometimes responding with aggression is warranted, but there are different types of aggression:

Using unprovoked aggression on someone is uncool. And provoking someone into aggression, and then attacking them (or responding to their aggression) is also you provoking aggression. The provoker is at fault even if he doesn't throw the first punch. This is the antithesis of everything that the spirit of the martial arts stands for.

Martial arts stand for sincerely attempting everything reasonable to avoid disagreements turning into combat, while doing everything possible to be prepared for all possible outcomes. Upon being unable to avoid a conflict, a Martial Artist ends the confrontation quickly as possible, and is willing to accept the consequences.

Since conflict involves humans, each person must make his own choices and decide if he has done everything reasonable to avoid the conflict. This includes trying alleviate the escalating tension, and leaving if possible. Since almost every conflict could be avoided, it is the martial artist responsibility to use forethought and foresight to avoid these conflicts and to learn from each conflict (how to avoid future ones).

The point being, that if the aggression (violence) is unprovoked, then you would be righteous in your response. But this is by far not the norm. Usually, there is something going on, and some provocation on both sides, and you have a responsibility to figure out what. Most fights are avoidable, and if you didn't avoid it, more often than not, you failed in some way. (Failed to read the signs, or failed to de-escallate when you could have).

Some believe that you are your brothers keeper. While that is not necessarily true, and you can not be responsible for others actions, neither is the opposite true. You do have some responsibility to other human beings, and must remember that they are human beings. So while you must react to a situation and protect yourself or your family and friends first, you must secondarily have some responsibility for the damage you cause. In other words, you must do whatever it takes to protect yourself, but you must also do avoid doing unnecessary damage to the attacker. This is an individual decision, based on risks and fears at the time, and will be made on a case-by-case basis.

Also, it is very rare for a "fight" just to break out, or an attack to end in serious harm without escalation. Usually a fight (verbal) starts over something minor, and then keeps getting bigger and bigger, and worse and worse, until someone ends up bludgeoned (or dead). So we have a responsibility to recognize escalation, and avoid it (diffuse it).