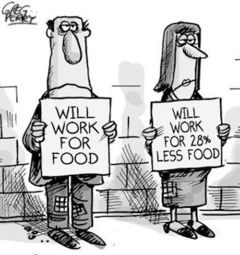 This one is many myths (lies) in one: (a) Women get $.77-.82 cents on the dollar compared to what men make (this injustice is called the "Gender wage/pay gap" or GWG) (b) We need big government (politicians) and new laws/regulations/taxes to fix it (c) Democrat politicians motives are all sincere, anyone that opposes is a sexist/misogynistic/bigot. All false, and debunked here.

So where did this myth come from?

I'm tempted to explain that it was discovered during Elizabeth Warren's colonoscopy, along with her brains, and the hands of a few marxist/union/special interest puppet-masters, but while that wouldn't be surprising, it's a tad unfair. She, and other contemporary far-lefties, have exploited their bases gullibility with this fraud (or even made their careers on it) and polarized the nation for political and personal gain, but they didn't invent it: they and the far-left media just exploited it. It predates them by generations.

So what is it?

The idea is that if you add up all the Men's and Women's salaries in the workforce, into separate columns, and divide by the workers, you get the average salary by gender. When you compare them, you can see that the average working women is making significantly less than the average working man. That difference is called the wage gap, and today, it is around 18% (but some use an older popularized number of $.77 on the dollar).

Of course if you have any logic/math ability, you say, "WTF? That only shows the difference between job choices, hours worked, bonuses earned, experience, or other things".

The first thing any competent statistician or logician would do, is normalize their datasets so you're comparing like things. (Not jump to a conclusion that it must be sexism).

That means you have to adjust for the following:

What happens when you do these corrections? Many studies have shown that as you correct for each of those things, (5% of the difference here, 3% there), the gap disappears -- it falls to a few percent or within the margin of error. So if there a real wage gap, it's a few percent: maximum. (see links/references at the bottom).

You can pretend there's a bigger difference by ignoring these adjustments, or you can be honest, but not both.

How or why did it get started?

During WWII, many women went to work, and there used to have separate classified sections for men versus women seeking work. When the war ended, many companies started increasing Men's salaries (or decreasing Women's), in order to make room for and not penalize men for gaps in job-experience while they were serving the country (and saving our liberty from the tyranny of progressive fascism).

The differences seemed to peak in the 50's and was slowly getting better (and attitudes were changing) by the early 60's, but there was still a significant gap (some say as high as $.41 on the dollar). So the Republicans wrote and offered the ERA (Democrats voted against it), and Republicans supported the 1963 Equal Pay Act: it became illegal to pay women lower rates for the same job strictly on the basis of their sex. But demonstrable differences in seniority, merit, the quality or quantity of work, or other considerations might merit different pay, just not gender.

It worked a bit. In the first 7 years, this generated 71,000 lawsuits and $26M in back wages for women (most of those justified, some not). Attitudes changed and grew as more Women went into careers and many more started by getting educations (degrees). And the unexplained part of the income gap all but evaporated. But the motives for keeping the problem alive, flourished under all that fertilizer.

Why do they keep up the charade? 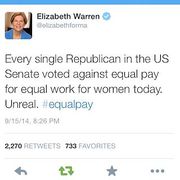 Imagine you're a politician that can exploit the gullible for votes? Since Social Justice Warriors see everything as sexism/racism, and every solution is a need for big government and vilifying the opposition, that's what they do. So politicians and the leftist media lined up to keep tracking the uncorrected numbers on how unfair things were, and use it as an excuse to keep making more laws/regulations/taxes to fix them. Then as more rational politicians started to realize this was getting out of hand and going too far, they would attack them as being "anti-Women", or part of the sexist cabal trying to hold the skirts down.

That allowed more victory, they could use the other parties reasonableness against them. They could keep passing more and more ridiculous overreaches of government power, knowing the other side would oppose them. Then they could use that to pillory them as sexist pigs. Examples:

Of course this whole $.77 thing (and government is the "cure") is logically ridiculous. Imagine this, you're any businesses-person and you're running on thin margins and you have the ability to cut your labor costs by 18-23% by firing your men and hiring all women instead, what kind of moron are you, to not exploit this advantage? That's what the SJW's and GWG warriors are trying to sell.

Not only does this apply to sexist male dominated misogynistic companies, but the same gap seems to be in companies that are Female run and operated. Marissa Meyers (Yahoo), Carly Fiorina (HP), Sheryl Sandberg (Google/Facebook). All of them were sell-outs, since their companies weren't significantly different than the norm. And in fact, all the SJW's and GWG-Warriors are hypocrites, since if you look at their campaigns, the women earn less as well (the Hillary and Warren campaigns and staffs, and so on). Once you challenge them on it, they suddenly remember math and explain, more women are volunteers instead of career people running the org, but this exception only applies to them and not everyone else.

There are wage and other gaps. Like in Ballet, Women out-earn men, do you hear any complaints about that? There are many industries that are mostly Women (like K-8 teaching), and there's a gender workplace death gap that favors Women. Why aren't those also issues if all they value is equality?

I'm not saying there's no sexism in the workforce. Hardly. I think there is a valid discussion on glass ceilings in some companies (or the biases in some promotions). I'm not saying Women don't have it rougher because of expectations by society/culture, along with childrearing (and complications thereof). And there are socio-cultural issues, brain chemistry (and personality) differences between the sexes as well. As an over-generalization, I think Women have better grasp on work/home balance and what's important, and that can hold them back a bit in their careers compared some men (in ways that are statistically observable). But I also think that differences in individuals far outweighs similarities amongst a group -- so group observations diluting the complaints is valid, but individual injustices can also be valid. But the idea that salary is just a reflection of sexism, and that it's this obvious, and anyone that opposes the Federal Government coming in and just magically fixing with meddling is automatically a sexist, is just brain dead.

There are two groups of people that spread these fictions about the gender wage gap (and that a law can make it better): Fools or Frauds. Either you know what you're talking about, and thus you know this wage gap is a lie (and you're a fraud), or you're a completely clueless dolt (fool) that has never talked to an economist, or read a real analysis of what's going on, and can't do enough basic logic to reason this out -- that most of the gap is illusory, and the solution is probably not government (or at least though that sincerely think it isn't government, are saying so because they're sexists).

Even if we assumed all the GWG-warriors claims were right (which requires removal of the reasoning parts of the brain), there's still a valid debate on how to fix it -- through education (liberty and tolerance), or by politicizing it and having the federal government micro-manage it. As if there's been anything run by Washington that didn't politicize things and make them worse. There are already many laws that say you can not discriminate based on many criteria (including gender), so the idea that we need more is saying that no legislator before them was smart enough to legislate this topic? Most of the issues that are being fought over in the name of this "wage gap" are not what they claim to be, but new hand-outs and trojan horses to get the Government (or trail lawyers), more into HR and legal departments, to micromanage businesses and personal lives.

The gender wage gap is just marxism in a dress (the Bruce Jenner of gender-equality). Make up a cause or law, that the reasonable must oppose as fraud/waste, then use their opposition to crucify them to their base, who is either gullible, uninformed, partisan enough to go along -- or all of the above. But the math and common sense just don't work. Republicans are so evil (especially the 6 female republican senators, and 22 female republican congressmen), that want their wives and daughters to make less than male counterparts? Businesses are too dumb and sexist to save 23% on their labor costs (for equal work and experience)? Only Social Justice Warriors and Gender Wage Gap Warriors are informed and fair enough to be able to fix the world's problems, and all you have to do is give up other people's liberty and give them your votes and money. Trust them. And I hear a Nigerian Prince wants to give you money, if you just send them a small advance.