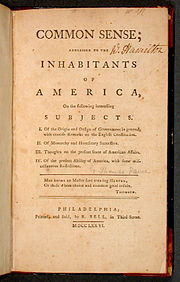 In 1776 Thomas Paine wrote the highly popular Common Sense to lay out why the Colonies should be self governed and independent from the UK. How popular was it? Relative to population it had the largest sale and circulation of any book published in American history. I'm interested mostly in Section 1, describing Government and Society.

The point is that we may need to make rules (laws), but they are an encroachment on what is important: individuals free will, to make the right or wrong choices. To speak truth to power, even when that is politically incorrect. It is that taxes and burdens on individuals should have limits -- and in the case of creating the nation it was a tax burden of about 2% that got us to rebel, as it had gone up to pay England's war debts where we had no interest.

The point of that little intro is key to understanding the difference between Socialism and America. To get the underlying idea that inspired America to rebel from England in the first place. We were founded on the idea that the government that governs best, governs least. That we the wester enlightenment that created America was the idea of trying to maximum individual liberty, religious liberty and economic liberty: something that was oppressed under British rule. So when someone tells you trying to reduce taxes, or minimizing government is un-American, I'd remind them that they can want Socialism (the Nanny-State), but that is fundamentally un-American... and absolutely nothing could be more American than the principles it was founded on, as elucidated above.