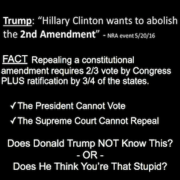 There are meme’s and political propaganda going around that tries to reframe truths, into something they can deny. Like the one above asking “Q: Doesn’t she want to abolish the 2A" (2nd Amendment), and then answering a different question about how hard it would be to do so legally. The question isn’t will Hillary succeed at doing it through the proper legal process (and getting an amendment passed that officially revokes the 2A), the question is whether Hillary WANTS to abolish it, and whether Trump or the NRA believe that. The answer to the original questions is "yes".

Because she says so

Well we know that Trump and the NRA and most of the basically informed followers of this believe that Hillary wants to. Why? Because she said so.

Here’s the audio of Hillary saying, "the Supreme Court is wrong on the Second Amendment. And I am going to make that case every chance I get.”, and the context was specifically around the Heller and https://en.wikipedia.org/wiki/McDonald_v._City_of_Chicago McDonald] Supreme Court decisions.

Heller reaffirmed what multiple decisions before it had said, that the 2A applied to INDIVIDUAL rights to bear arms, and not to a states right to control them. And McDonald was that the right to bear arms also restricts state and local governments (not just the federal government) from infringing on that individuals natural right, as recognized by the constitution and authors intent. Taking those away, is taking away an individuals right to bear arms, and allowing the State's and cities to legislate/regulate the rights away.

Hillary’s disagreement with the Supreme Court (the ultimate authority) let’s us know that she’s an idiot. When you go back to original intent, it is quite clear as many historians, legal scholars, and the authors themselves said at the time (and since). Yet she thinks they are all wrong, in ways that would fundamentally strip individuals from their inalienable right. There’s no way you can be against those rulings, and be for the 2A protections as recognized by them.

So we know what Hillary wants, because she said it: she wants to change the 2nd Amendment protections to allow for states and cities to encroach on them in ways that are incompatible with the authors original intent. You may think that's OK, but a quick scan of the Gun Quotes : Founding Fathers, let's you know that what she's proposing is NOT original intent (thus not Constitutional, as the law is written).

Whether she’s correct to want to, or whether she would succeed, is beside the point that she wants to abolish (fundamentally change) the second amendment. So that concludes the top part of the meme, if you take her at her word. Either she was lying to the audience when she says she disagrees with the Supreme's, or she's lying when she says she doesn’t really want to repeal the second. And there's much more evidence that she supports many regulations that would violate the 2A as recognized in Heller/McDonald.

What is the loophole?

No terrorist has ever used these imaginary loopholes that the Democrats scream about, and only a handful of criminals ever had. The idea is that you can meet strangers at a gunshow (or on the Internet) and commit a questionable transaction in the parking lot, which is already against the rules of the show, and city/state laws. "Psst, hey want to sell me a gun in the parking lot? This isn't suspicious, and I won't mug you, I promise". Because getting guns this way (through random meetups), increases criminal/terrorists risks, Criminals and Terrorists virtually never use this to get guns.

The truth is, what this law ACTUALLY says is that you may never ever sell, loan, borrow, give or trade a gun legally, including to your own family -- or that you're guilty of a federal felony. (That's always in the fine print of these laws). Guns would become like class III drugs, that you can't transact without government approval. Let your brother try your gun out at the range, without you being there, and instant felon. And that's why the informed gun owners don't want these laws: it stops no criminals, it intrudes heavily on the otherwise law abiding.

Hillary doesn’t have to get an amendment abolishing the 2A. She just need to undermine it, which she’s promised to do, through a few mechanisms.

(1) She stated that she'd like undermine it with litmus tests for Supreme Court justices.

Now she only mentioned her contempt for the 1A and 10A, and the basic constitution, by wanted to revoke 4,000 years of precedent that says individuals in corporations have similar rights and responsibilities as if they are individuals. (Corporate Personhood & Citizens United), and that she wanted to protect the extraconstitutional overreach against the 1st and 10th amendment in both Roe v Wade and Obergefell v. Hodges. But everyone believes she also mentally included her earlier 2A comments as one of the litmus tests, whether verbalized or not. (And she did mention it in other contexts).

Whether you agree with the rulings or not, litmus test is not-even-code for Supreme Court stacking. It is openly saying, “the Executive branch will control the Judicial branch” directly, which completely violates the whole separation of powers that was the foundation.

If undermining due process wasn’t bad enough, she also mentioned a few other ways she’s subvert our government. She’s not even coy about it, because she knows that the media and her base doesn’t care enough about rule of law to get upset. They think rule of law, is anything you can get away with. (The ends justifies the means).

... by anyone using their product improperly. And she was against court rulings that felt gun manufacturers should be like every other manufacturer, and not liable for the abuses of owners.

Even far left of center Politifact calls her wrong on her statements — that Gun Manufacturers have complete immunity, and that other manufacturers do not.

When a judge ruled that a gun manufacturer can’t be sued for misuse of their product (accepting the law and common sense), Hillary went on to claim she needs to fix this, and undermine the 2A. (There’s no way to undermine the manufacturers of guns, and give them extraordinary liability, without undermining the 2A as well):

Russ Feingold, ex-Senator and Senatorial Candidate for WI (D), and Amy Rao, well known friend of Hillary (FOH), stated clearly that they hope and believe that Hillary would undermine the second amendment through Executive Orders, including the gun-show and "internet" loophole. As well as restrict/control ammunition sales (another way to increase the costs to legal gun owners).

Wikileaks has emails from Brian Fallon (Hillary's Press Secretary), that says she would (unequivocally) enact an order to close the gun-show loophole. As well as others that explain she wants to impose manufacturer liability (to make it unaffordable to manufacture guns, or at least drive up their cost). I'm not sure how she thinks she legally supersede the legislature with executive mandates, but it is their stated intent to try. Like a lot on the left, they write illegal mandates and laws, and know that it'll take 2-10 years to get things through the courts, and get it overturned: in the mean time, they've cost a lot of money and ruined people's lives, so they think it's a win.

This is a dumb law that says that a bunch of hunting and sporting rifles would become banned assault rifles overnight, based on stupid criteria, then went on to restrict and control ammunition. This included revolver shotguns, semi-automatic pistol rifles and shotguns (if they have a removable magazine), anything with a folding/extending stock, and magazines that held over 7 rounds. Most parts of it were struck down under the Heller ruling, which Hillary disagrees with. After expensive legal battles and promised by the advocates on how great it would be: it didn't work. New York's crime stats show that Homicides and Shootings went UP after it was passed (and before it was revoked). Now their agenda is to pass Safe Act 2 -- doubling down on a bad idea.

With a record like that, how could an informed person NOT believe she was a champion of undermining and repealing the second amendment?

Democratic National Convention, Hillary said, “I’m not here to repeal the Second Amendment. I’m not here to take away your guns.” But in every possible way, she's done the opposite. Everything that encroaches on the 2A or gun owners freedom, she's been for. She's spoken about how great countries policies are that don't have our second amendment protections (like UK or Australia), and where they enacted complete bans, and have seen their crime, violence and gun crimes go up since them.

So with 30 years of her always being on the wrong side of every gun control discussion, and the NRA rating her as an F. There's a reason why everyone who is the slightest bit informed on Hillary and Gun Control, thinks she's against the second amendment. So while the media like the Washington Post just embarrasses itself denying she's anti-gun and anti-2A, the evidence of her record is so overwhelming that they just look like stupid fools. As do the people that try to regurgitate Hillary's, "I'm not against guns or gun owners" discredited rhetoric.

So no one claims she would actually succeed at legally getting an amendment to repeal the 2nd, only what she would try to undermine it in every way possible, as she's done for the last 40 years. And the best she can hope for doing so, is to create expensive legal battles, and more divisive societal friction between the informed and the democrats. All for an issue that would only lead to more violence and death, and has never delivered on the proponents promises.