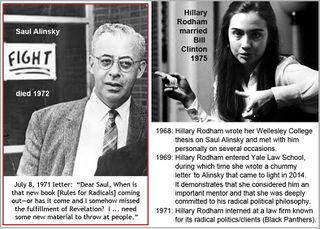 Born 1947.10.26 in Chicago, Illinois. She was a nice covnservative republican until 1968 and Wellesley College, when she meets radical activist and community organization Saul Alinsky and becomes an acolyte. She wrote her senior thesis about her idol, “There Is Only the Fight: An Analysis of the Alinsky Model.” Our teenage crushes shouldn't held against us 40 years later... unless we never admit they were misguided mistakes (which she's never done), and they keep influencing us (as they appear to have). Many of Saul's "rules for radicals" (lying, cheating, false flag efforts, dirty tricks, rhetoric, blaming the other side, and so on) seem to keep happening in and around Hillary, over and over again. All while evidence disappears, and people around her are found to be corrupt and go to prison... which are either all pure coincidences and frame jobs (according to her supporters), or she's just following the game plan she learned as an impressionable teen.