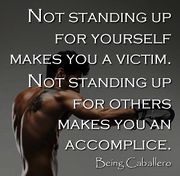 Pacifism: when is fighting is better than the alternative? These are my thoughts. To me, the aggressor is not the one that throws the first punch, but the one who insists on fighting -- and it is not the person who won't fight because they can't win, but is the person who tries to avoid fights and exhausts all alternatives despite knowing that they would probably win.

There's a Yin and Yang to all things (balances). The Yin is pacific, the Yang is aggression, and to understand one, you need to reflect on both.

The aggressor is not the one that throws the first punch, but the one who insists on fighting.

If you ever get into a fight, it should be because you are "forced into it". That means that you have taken every opportunity within your power to get out of it. Leave if you can, fight only if you must! If you do get into a fight, it is usually because you missed many opportunities to get out of the situation or to properly assess the situation. That failure should outweigh any success.

On the other hand, as a defender, I do not believe that you have to wait for the opponent to punch you first. If the opponent is determined to fight, even-though you have been doing your best to defuse the situation (or leave), I believe you may defend yourself first. I doubt the law sees it the same way, but I'm talking about what is moral (in my mind), not what is legal.

Reaction times being what they are, that unless you completely outclass the opponent (age, strength, training, etc), the first attacker advantage can be such that the person that throws the first blitz attack wins. You have a moral obligation to try to avoid conflicts and hurting people, but whether you want to do that to risk to yourself is a personal choice.

The best defense is a good offense, and vise versa. This does not mean you can bludgeon someone because they are yelling in your face - but if someone is determined to fight, and it is inescapable, then I may not wait for him to hit me (or try) - I might stop the fight in the quickest way I know how (and he might not like what that is). Usually, that's a disabling/stunning attack, so I can exit the situation, but they don't know that.

In a fight situation the catalysts might be something like a grab, or just moving at me too quickly (the telegraph of a punch or other attack). It might be signaling his friends to surround me, or going for a weapon. There are many things that signal that the fight is immanent, and inescapable, and the only thing left to do is act first. Keep in mind all the issues of Ethics of a fight, or Legalities of a fight.

Aikido (with Shinto influences) believes that you have a responsibility to NOT hurt the opponent. While I don't disagree completely, I think your first responsibility is to yourself, your family, and your friends - you need to get home in one piece (with as little risk to yourself as possible). If you make a mistake in a street fight, and the person knocks you down or knocks you out, there is no guarantee when he will stop. This person has proved his intent is to do you harm, by not letting you back out of the fight. So he may be one of the "sick" sub-humans that gets his kicks out of hurting others. If you give this type of individual the opportunity to pummel you, he may not stop until you are seriously injured, possibly even fatally.

A fight is not a game, it is a possible life and death situation and should be treated as such. No individual is so good that he can't get sucker punched or make a mistake. So playing (showing off) or being "too nice" (trying not to hurt the opponent) are dangerous ventures. End it, end it fast (which often means violently). Being too nice, is good for your soul - but may be dangerous to your body.

I am not that good a person (that I'll risk harm to myself for the sake of a stranger with an anger problem, who probably needs a lesson anyway) - I believe in ending it with as much safety to me as possible (which may mean more risks or damage for the opponent). I can sleep fine knowing that any injuries he incurs will be lessons to remind him not to attack others, and were the results of his provocation. You are going to have to make those judgments for yourself, but do it before hand. Know how you will respond, plan for how you will respond (and what you expect of yourself) - and program yourself to respond in the way you desire to.

The pacifist is not a person who won't fight. A pacifist seeks peace, but that does not mean he won't defend himself, that's just the definition of a martyr. A pacifist is a person who could fight (and win), but will try every other possible alternative before being forced into fighting.

If you have no ability to fight, so you don't fight, you are not being a pacifist; but a person choosing the only reasonable option available to you (if you fought you would get beaten so you don't fight). So to be a true pacifist you should be capable of fighting, and then choose to avoid it at all costs -- otherwise you are just a wimp with an excuse. Pacifism is not always about the outcome, but about the effort exerted to avoid conflict.

Just because you choose not to fight does not mean you are being a pacifist. If there is nothing the other person can do, including violence, to get you to you fight; then you are not stopping violence, your inaction is actually promoting it or tolerating it. By letting someone to attack you, your friends or your family, and doing nothing about it, you are letting this sociopath know that people are willing to let him use intimidation to get what he wants (or get away with violence). That is not a service to society, or to yourself. This may preserve your philosophy (ego), and even the short term peace (you didn't get into an immediate fight), but causes a continuing threat to the long term peace (he got away with it before, so he will continue to try to get away with it in the future). You can not preserve the peace by sacrificing peace.

To pacify is to calm, appease and avoid hostilities; not to allow someone to infringe on your or other peoples rights.

In letting someone infringe on yours (or others rights) without doing something to prevent the person (physically, intellectually or legally), you allowing hostilities to be promoted without doing anything about it.

This does not mean you have to take responsibility for everyone in the world, or get involved in things you have no understanding about. It is just explaining that inaction towards the intolerable can be almost as bad as doing a hostile action. We even have laws against inaction.

To be a pacifist there must be things you are willing to fight for. 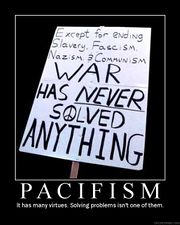 The famed pacifists Gandhi and Martin Luther King fought hard for their ideals -- they just avoided physical means; preferring to use social disobedience to get points across. If there is nothing in the world you are willing to fight for (even peace), then you are not a pacifist, you're just showing total disregard for the world around you.

I don't think the model of proper human behavior is being Swiss and declaring neutrality or that there's nothing worth fighting for. Watching a gang rape or homicide and saying, "not my problem", or "I would help, but I'm too peaceful" is not the paragon of what we should stand for.

If you have to fight for what you believe in (whether they be personal rights, life, liberty or the pursuit of happiness), and you choose to do it physically, that does not mean that you are not a pacifist. Pacifism is personal interpretation, choosing to exhaust every other possibility before resorting to violence, shows the will to keep peace. The ends does not justify the means; but neither does the means justify the ends. Nor does the ends automatically discredit the means. Sometimes the only way to serve long term peace, is short term war.

General Mattis has the best quotes of what a trained pacifist thinks like,