Richard Nixon was a complex and successful President, and as usual, much of the History written by the left, is shallow, wrong and makes people dumber if they believe it. That doesn't make Nixon a saint, but he was more saintly than many of his contemporaries: more honest and less corrupt and power abusive than a Johnson, JFK or Eisenhower. So history, and the rubes that repeat what they've been fed without learning more, is doing a disservice to reality and what we could learn, if we weren't programmed by lying leftists in education and the media: Nixon : 5 items

Why we fought the Vietnam War -

So Americans didn't lose the first Vietnam war, democrats lost us the second one, by letting Russia, China and North Vietnam know they could have it.

Memes-Nixon - Nixon is remembered by the less than historically informed for one thing, saying, "I am not a crook". They think it's ironic, but he wasn't a crook. So ironically, most of the memes that mock Nixon's caricature, actually mock the people that are mocking Nixon, they just don't know it. Grandfather on Nixon - My Grandfather (who was quite a personality), summed this up for me before he died. At one of the holiday meals he was pontificating about past presidents: Of course there's more to Presidential politics than just that (it's a lot more nuanced). But I had to laugh, and there's a certain wisdom that when you're in a pit of snakes, you can't be a saint and succeed. Idealism can't get in the way of pragmatics, which is part of why I did my best to avoid being involved in politics. (I hate having to compromise my ethics).

More to the Story 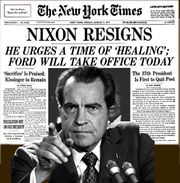 Of course, there's a lot more to Nixon than that, and a lot to read about him. Here's some other snippets that cover part of this complex guy: