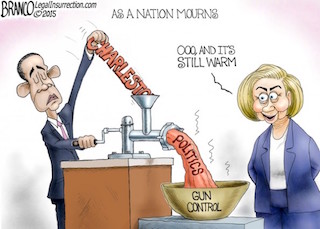 So just let me get straight what’s going on.

Since the San Bernadino shooting was by a devout muslim, who just happened to have:

Whatever we do, we shouldn't address the majority of our murders (and mass murders) -- which are gang problems. Focus instead on the rural gun owners, because most of the red counties in the U.S. have zero gun murders per year (despite the highest gun ownership).