Trump and the Disabled Reporter 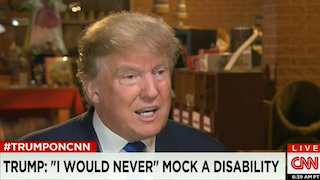 This story is a good summary of what happens with current events, a hyper-partisan media, and why we're so polarized.

Media meme: Donald Trump knowingly mocked a disabled reporter (Kovaleski) he's known for years, for no good reason, and they have it on video tape. This is a new low for Presidents, showing how unpresidential and classless he is. The media celebrates and replays the story, none bothering to offer the actual facts.

Truth: Turns out, WaPo "fact checked" Trump on a claim about arabs in NJ celebrating after 9/11. They claimed it was false. But the reporter that did the fact check had written an article detailing the celebrations back in 2001. Trump was mocking WaPo stammering trying to walk back their lie that he was wrong, and used a gesture of flailing arms that he'd used many times before to animate being flustered. They still-shotted him with his wrist bent (as the reporters disability caused, not flailing) and claimed he was mocking the reporter, because Trump had maybe met the guy in person 30 years earlier during one of hundreds of interviews he'd had with the financial Press. The press omitted all that context from their reports.

The surface story told by the media is Trump mocks the disabled. It's become such an often repeated lie that the gullible and Democrats (but I repeat myself), often repeat it. Yet, there's no real evidence. Context of what happened changes everything. We live in different worlds: the medias reality, versus the rest of us.

And tada: that's how journalism works in America today.

This isn't a one-off anomaly either, every event I researched that the Press has covered, and the liberals repeat about Trump, is a caricature of what actually happened. It's like the myth of Sarah Palin saying, "I can see Russia from my House" -- that was a SNL skit that has been repeated so often, people like Barbara Walters think it actually happened. The left's version of history, and the real one, are parallel universes.

I don't care how people vote. There are reasons to like/dislike all the candidates. Trumps sloppiness with words, or exaggerations (like thousands, instead of many dozens) is something to dislike. It's part of why I did not vote for him. But I do care when people are repeating a falsehoods and hate, or whining about the mote in their brothers eye, while ignoring the log in their own. (Hypocrisy gets my goat).

The media calling Trump, the disability philanthropist, "anti-disability" is the biggest mistruth since McCarthy. Using all the lies of omission in this story has worked: the gullible, uninformed, Democrats (commas optional), all think this was an example of something that the informed know it wasn't.

The media controls both the present and past, at least for those either too busy to be skeptical, or too partisan to care. For the rest of us, we're infuriated by the injustice of liberal media spin. The intellectually lazy will call us Trump apologists for not buying the same distorted view of events that they've been spoon fed.