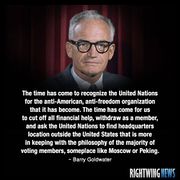 “The time has come to recognize the United Nations for the anti-American, anti-freedom organization that it has become. The time has for us to cut off all financial help, withdraw as a member, and as the United Nations to find headquarters location outside the United States that is more in keeping with the philosophy of the majority of voting members, someplace like Moscow or Peking.” ~ Barry Goldwater

If there's one thing the U.N. is fully of, is far lefties, willing to corrupt science for political agenda's. From the IPCC and their long discredited Climate "Science", to things like this rant against poverty in America. There's 193 Countries in the U.N., and virtually all of them have lower standards of living when you adjust for purchasing power and purchasing costs... but the U.N. singles out the U.S.? Not political at all. This is nearly as bad as their human rights council, full of human rights abusers, criticizing Israel or the U.S. for being 10x better than they are.