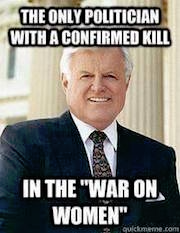 Whenever I hear about the Democrats and their Fake News complaining about the Republicans and the "War on Women", the word that comes to mind is hypocrites.

We have dozens of examples of Dems behaving worse, and the media excusing them -- while imagined slights are exaggerated if the person involved might be conservative or have an (R) after their title.

Again, I have no problem with the same standard being applied to both sides -- just with the hypocrisy of pretending that their side has the moral high ground while objectively behaving worse.

The first aspect that needs to be debunked is the myth that all conservatives or Republicans want to outlaw abortion, or that all liberals/Democrats support it. Once you get into adult conversations about what aspects of abortion should be legal or have some constraints, much of the polarization evaporates -- and we find out the conservative/Republican average is well to the left of where the entire country was when Roe v. Wade was ruled on. And the left and their media today, is well, well to the left of where the far left was back then, or the majority of people are today.

The second aspect that needs to be debunked is the myth that Conservatives/Republicans are against birth control: the gross majority are big fans -- and while there's a few devout catholics on the right that might have some issues with it, or a few devout Christians that have problems with abortifacients (a type of birth control that doesn't stop conception, it just causes the fertilized cells to be aborted: like the day-after pill), there's also a few on the left with the same views (just very slightly fewer). None fo that is opposing a woman's rights, it's just debating the ethics of where lines should be drawn (even when I don't agree).

Where the real debate comes in, isn't on allowing birth control, it's over who wants to pay for it. The left sees everything as an opportunity for social justice and wealth redistribution: so they want it "free" (e.g. to force other people to pay for it, even if morally opposed), under the false flag that those who oppose paying for other people's birth control (which usually means abortions), are opposed to birth control entirely. Which is not the case at all.

Teddy Kennedy - The only confirmed kill in the war on Women. That never bothered the left. You can murder Women, aid your family in raping them, and avoid being called misogynist -- as long as you're a fan of abortion and identity politics.

Bill Clinton - Caused feminists to create the "single grope" rule -- that applies only to Democrats. When Trump professed to grab some strange (and they liked it / let him), suddenly the Clinton standard went out the window and progressive amnesia kicked in. [1] Hillary Clinton - Worse than Bill's behavior of serial assault, was Hillary's attack on the Bimbo squad, while simultaneously pretending she was an advocate for Women. Bill was an honest cad: you know what you were getting. Hillary was a dishonest rape facilitator, that abused victims of Bill, again.

Harvey Weinstein - Serial mollestor of Women for 30 years[2] -- and more importantly, Democratic Bundler that contributed heavily to Hillary, Obama and others. Everyone knew it was going on for years, it was a running joke in Hollywood.[3] Until finally some PR critical mass is achieved, then he's sacrificed at the alter of shame.

Jimmy Kimmel's "guess what's in my pants". Again, I don't begrudge the game -- I just have a problem with the double standard. [12]