What is a gun? 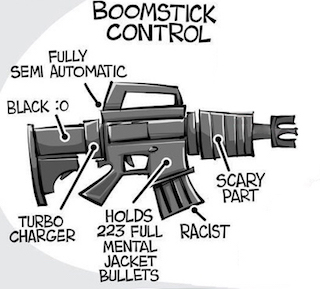 A gun is just a tool. Nothing more, nothing less.

A tool is just a device used to aid in work. Thus at the mechanical level, it is just a tool that throws small rocks (called bullets) very quickly -- a gas-powered slingshot (rock thrower). Everything beyond that is the emotional (irrational), or reading in intent of the user (or fears of the observer). Tools don't have emotions, history, intent. Those are the biases and bigotries of the observers, not of the device. But if you want a tool to be used more for good than bad, then just make sure the people and intent of those having them is more good than bad. Outlawing them for everyone except bad people (who will ignore prohibitions), does the exact opposite.

A gun is inanimate object

They do not talk to people, or convince people, "kill them", "murder them", "commit this crime". Violence and crime seem to be more cultural than having anything at all to do with guns. Blaming guns for the crime is a way to ignore the issues (or make them worse), instead of addressing them. So while a gun has never made a person commit a crime, they have empowered many people to stop them.

A gun is not a killer

I can tell you what a gun is not. A gun is not a tool designed strictly to kill people. When someone says that, I know immediately that they are arguing with their heart -- and not using enough of their head (emotion instead of reason). When you argue from that position you are not thinking. Not about cause and effect, or action and reaction, or most common uses, or how to save the most lives, or anything logical. You are just flat out persecuting and attacking that which you fear, don't understand and choose not to learn about. The dreaded boom-sticks.

Men use tools, not the other way around

Most men are good and law-abiding, and not likely to kill. Thus the facts are that guns are used (the gross majority of the time) to do anything except kill people. 99% of the time that guns are fired, it is at targets -- not anything alive. And 99% of the time it is fired at something alive, it is hunting for food (or at least trophy, or to end a menace/nuisance). Most of the time a gun is pulled, it is to intimidate without being used to fire at a person. When a gun is fired at a person (a very rare occurrence) the gross majority of time, it is fired in self-defense or to stop a crime. And only in a very, very small fraction, of a small minority of cases, is the gun actually used to kill someone. Even then, most of those cases the person being killed is the one that gave the shooter no other alternative by their actions (or they wouldn't have fired in the first place), and the alternative for not shooting, is much worse than shooting. And for this minor fraction of percentage point that guns are actually used to kill people or commit crimes, some people completely and irrationally categorize the tool as existing solely for that purpose, to kill people.

But a gun is a weapon!

Guns are a very effective tool (weapon) that throws rocks very well. They are designed to do that so effectively that they can easily kill effectively. But cars are designed to go fast and corner well -- does that mean that they are designed to escape from crimes or to commit them, or do we consider all the other uses? A weapon is an instrument of attack OR DEFENSE! Certainly they can't mean that defense is bad? We know that we have lower rape rates than countries with gun control (like Sweden), so what's more important, an irrational fear of someone else being able to defend themselves, or trying to teach people to conquer their fears? As for a tool of attack, ANY tool can be used as a tool of aggression. Can you think of anything more benign that lime Jell-O? Well people have been drowned in it, or died by having theirs poisoned, so one of the most harmless substances on earth (congealed sugar-water), has been used as a weapon. So if weapon is the criteria for bans, then nothing can be allowed.

Many jump into pseudo-philosophy. Cars are used for driving, knives are used for more than stabbing, but a gun, only shoots things. (Ignoring that cars kill more people, and people that survive shootings and stabbings are loosely equal). But if we are going to get into the metaphysical discussion of intent and philosophy, then we should recognize that the weapons are not intended to be used. The best weapons are the ones that are so intimidating that they stop a behavior WITHOUT them having to be used. Nuclear weapons are excellent because of how many lives they saved by their existence. No one wanted to start a war and use them -- so they influenced (both sides) because of the consequences, to exercise more constraint,and avoid wars we might have gotten into, otherwise. It worked for a while, until politicians started creating "limited war" to get around the consequences of unlimited war.

Guns are such an ideal weapon that when a cop or private person "uses" a gun, it usually takes no more than the threat of using it, to stop the other person from doing whatever they were doing (thus saving a life over an alternate path). So when guns succeed, they save lives, it's when they fail in their primary purpose of defense, that they force the alternate purpose (of being fired). But that still means that guns are better than the alternative, most of the time they are used. Most of the time, really bad/violent altercations and events don't stop until people with guns (police or citizens) show up, and make them stop. The alternative, of them continuing unabated, is usually much worse than when guns arrive and stop them.

If you want to measure a tool or action, one must weight the good against the bad. So it isn't that cars are used to break the laws and kill slow and stupid animals (or people), and so all should all be eliminated -- the value of the car has to be the balance of all the good versus all the bad. We know that. But some want to selectively ignore logic/reason when it comes to guns.

Each year guns are used a couple million times for defense or stopping a crime (approximately 2.5M times in the U.S.)-- and about 8-9 of thousands of times that end in murder (unjustified killing). That's a pretty good ratio, if you ask me. The majority of the murders are repeat criminals using ILLEGALLY obtained (or owned) guns on other repeat criminals (like drug dealers/distributors shooting each other, or gang bangers fighting over turf). If you want to stop those shootings then you just need to keep the criminals locked up. Gun accidents are phenomenally low -- statistically you have a greater chance of drowning in your pool than in being accidentally shot to death by a gun! But the antigun groups (and our media, but I repeat myself), have mislead the gullible with their dogma. That the masses buy into that propaganda and don't challenge it or question. So more than gun control, we need media control, or public control. You shouldn't be able to vote on something you know nothing about. I'm not only for VoterID, I'm for VoterIQ (you should have to pass a competency test on an issue, before you can vote on it). That would take out 99% of the gun-controllers.

As a society we need to resist fear, hate and intolerance. Whether it is fear, hate or intolerance for your neighbor, their race, religion, culture, or hobbies and interests, or even the guns that they own. Live and let live. If we allow the systematic persecution of others for the sake of fear, hate or intolerance then we are letting our society become that which we should not. This applies to guns as well as many other things in our life.