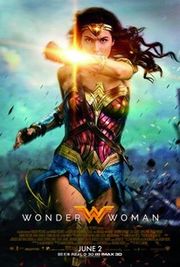 Set in 1918, the story is about Princess Diana of the Amazonian women, and her live on a hidden island called Themyscira. Girl meets boy when American pilot Steve Trevor crashes his plane and is being chased by Germans nearing the end of WWI, whereas Dianna follows a prophecy to end Aries (the Greek God of War’s) evil manipulations over mankind.

I would recommend the film. It was entertaining, great action, acting, and Gadot does a great job of playing a badass (both in real life and on screen). So it was worth my $10 to see it. But that being said, I still thought Guardians of the Galaxy-1 and Deadpool-1 were better films, because they didn’t take themselves so seriously. This told a story and was a good action film, but I often want either a bit more fun, or a bit more depth. Serious superhero movies tend not to quite work for me.